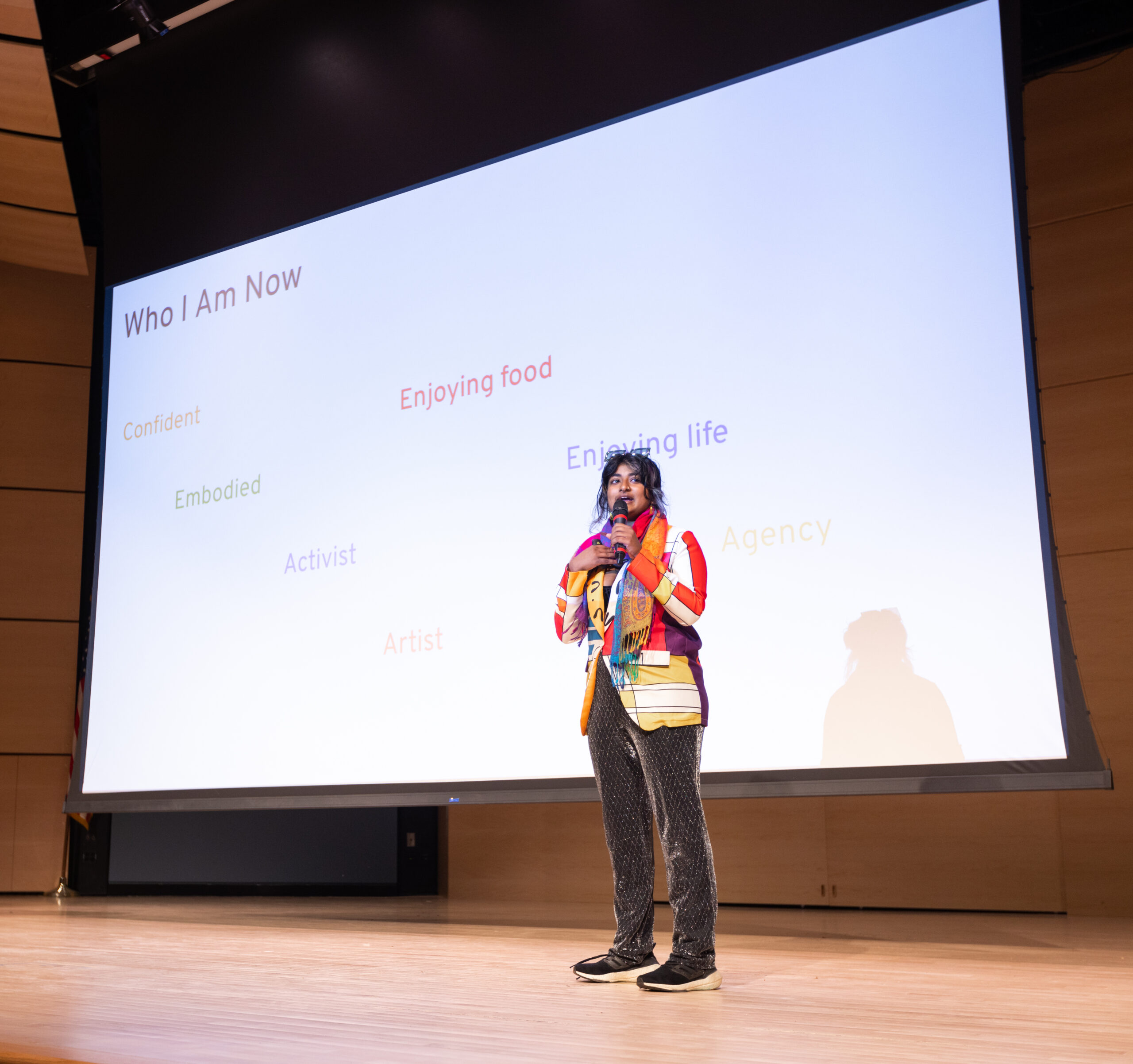 On April 20, artist and activist Athena Nair (she/they) spoke in assembly about what it means to have a positive and healthy relationship with one’s body. In her talk titled “Let’s Unpack our Fear of Fatness: Exploring Fatphobia and Body Positivity,” they walked the audience through the five competencies of The Body Positive, a nonprofit organization that teaches people to listen to their bodies, learn and thrive, with the ultimate goal of ending end the harmful consequences of negative body image.

The first competency Nair shared is the reclamation of health. “The basics of this are that health is not weight, and that fat is not bad,” they said. “That might spark some interesting reactions in people, because we are told for so much of our lives—by so many people and so many institutions—the very opposite.” She broke down the origins of fatphobia and its historical ties to racism and sexism, specifically citing the scientifically flawed origins of the body mass index (BMI) in 1832.

The second competency is the practice of intuitive self care, which Nair described as “prioritizing oneself first.” “I’m the only person that is going to be with me for my whole life, from every second of every day,” she said. “Even my parents can’t care for me in the way that I can care for myself.” She described taking control and putting oneself first as an act of resistance against negative pressures from society and media.

For the third competency—the cultivation of self love—Nair said the fear of rejection is often the biggest inhibitor to that love. She then guided the assembly audience on a peaceful visualization exercise in self love.

Fourth on the list is the recognition and declaration of one’s own authentic beauty. “The Body Positive told me for the first time that I could include myself in the definition of beauty,” said Nair. It can be difficult to recognize this personal beauty with the majority of traditionally popular media’s promoting different values, so to this effect, Nair introduced the fifth competency—building community. “For me this is about taking control of my social media,” she said. “So much of our brain space is created by what we’re reading, what we’re looking at, and what we’re hearing. Controlling and choosing what we’re surrounding ourselves with is a part of changing our lives.”

After assembly, Nair met with a group of students including Body Positive Nobles (BPN) in the academic center to continue the discussion. The BPN club has since created an uplifting installation in Gleason Hall for people to share what they love about themselves. 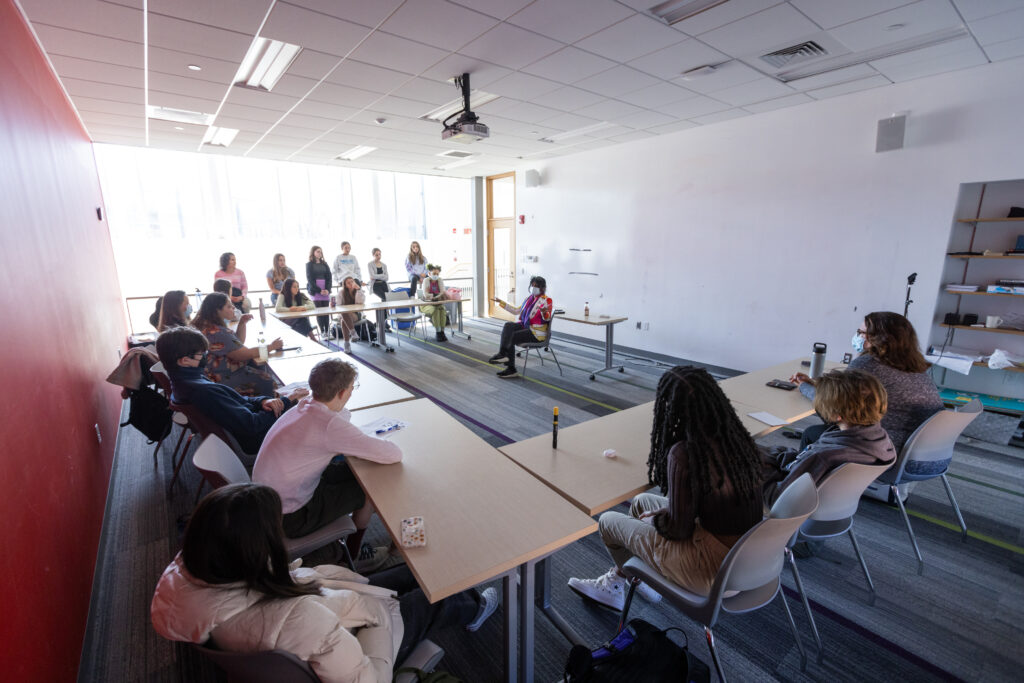 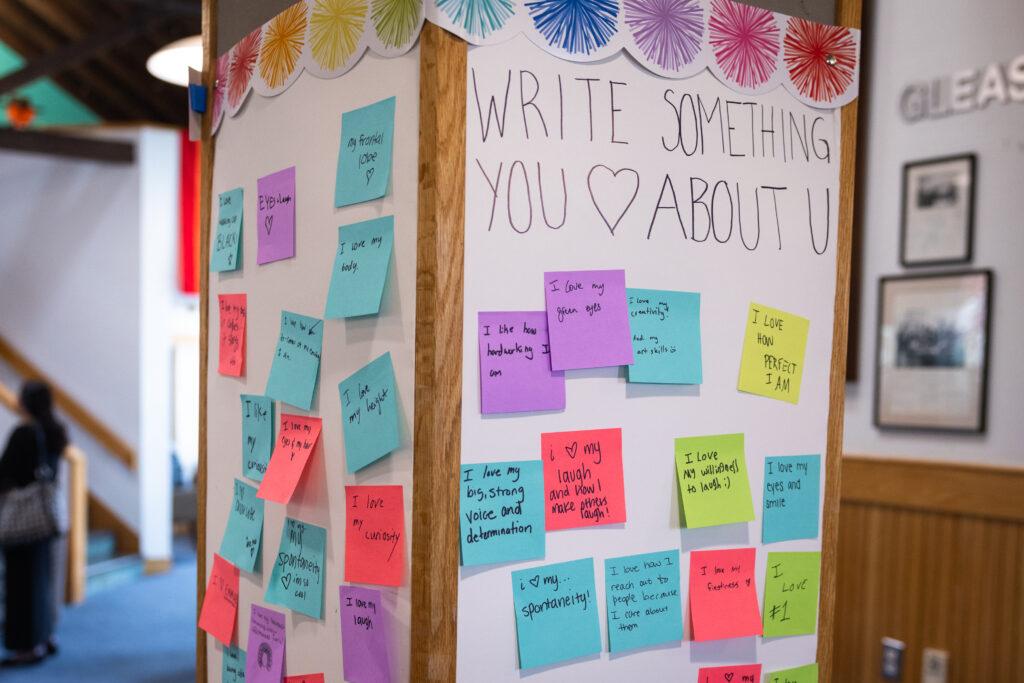