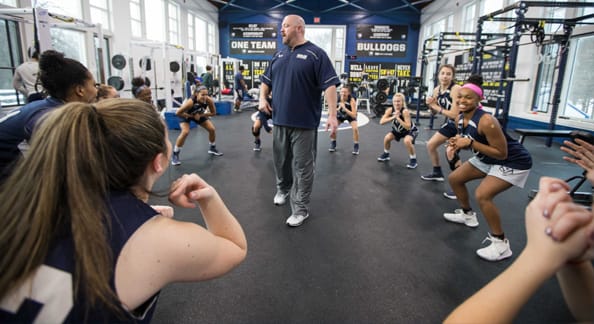 Director of Strength and Conditioning Kevin O’Neill spends as much time helping athletes build muscle as he does coaching them to be leaders. “What’s more important than how much you bench or how much you squat is what kind of person you are,” he says.

This philosophy may be what recently earned him the Northeast Regional Coach of the Year award from the National High School Strength Coaches Association (NHSSCA). He will receive the award on June 15 at the NHSSCA National Conference.

O’Neill heard about the NHSSCA while listening to a podcast on his commute to work, a daily professional development ritual for the seasoned coach. The podcasts he listens to mimic the twofold goals of his program: “the long term athletic development of the kids, balanced with developing future leaders and good human beings.” He alternates listening to podcasts that focus on strength and conditioning techniques with podcasts about leadership, culture and mindfulness.

In the Fine Family Strength and Conditioning Center, team competitions throughout the season develop leadership skills and a culture of positive reinforcement. Although the team competitions result in a team champion at the end of the season, O’Neill says that some of his favorite moments in coaching often involve the less athletic students. “The part I like is when they start walking in the weight room with a little pep in their step, a little more confidence … that can carry over to a number of areas, whether it be academic, social or family life.”

Mindfulness may sound strange in the context of a weight room, but O’Neill says visualization has been an important part of his practice since he was in graduate school. “I’ve always believed in visualization,” O’Neill explains. “If a kid is struggling with a lift, I just have them close their eyes, picture themselves doing it correctly, take a few deep breaths, then open their eyes and do it for real.”

O’Neill hopes that Nobles students are recognized as “kids that believe in themselves and believe in their teammates, kids that aren’t afraid to work hard, and kids that will own their own actions.”

Despite winning the Robert J. Agostini Award for athletic contribution as a non-competitor in 2017, and the recent NHSSCA award, O’Neill maintains his humility: “Having a goal and attempting to develop leadership and teamwork at Nobles doesn’t make me special—that’s what our staff does. Strength and Conditioning is just another means by which you can do that.”