by Noble and Greenough School
About, Uncategorized Jul 1, 2017 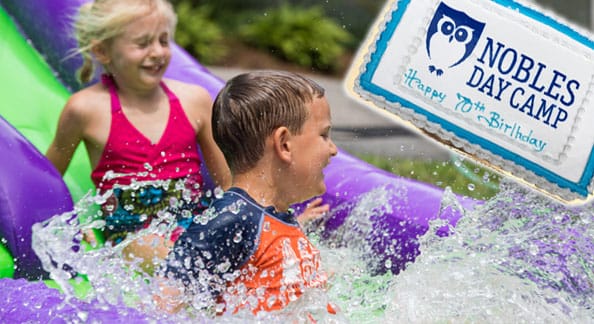 Everybody loves a good birthday party and, this summer, Nobles Day Camp has a lot to celebrate. On July 25, campers enjoyed a special birthday cake to commemorate the milestone.

“I’ve been part of this community since 2003,” says Emily Parker, camp director, who has been involved with camps for more than 40 years as a camper, counselor-in-training and in many leadership roles. “What I love about our mission is that we help kids have fun and take risks together in a safe, community environment,” Parker says. “In many ways, the camp’s mission follows Nobles’ mission to inspire leadership for the public good. Year after year, our campers return. Our counselors return—and we have another incredible summer.”

Many summers ago—In 1948, in fact—Noble and Greenough School teacher Grandin Wise won the support of the Nobles Board of Trustees for his idea to launch a summer day camp at the school. Wise’s epiphany 70 years ago has led to a thriving camp that is one of the oldest day camp’s in the region.

As Wise and the trustees refined the details, they decided to include both boys and girls, even though Nobles was then an all-boys school. With a clearer vision for the camp, Wise invited George K. Bird to join him as co-director. Their names together, Wise and Bird, inspired the camp mascot, the Nobles Owl.

In late spring 1948, the co-directors gathered a staff of five, announced the opening of Nobles Day Camp and prepared for the arrival of a small gathering of children. To the surprise of Wise and Bird, 48 boys and girls arrived on opening day!—many more than anticipated. In summer 2017, Nobles Day Camp welcomed nearly 1,500 campers, ages 3.5 to 14.

Over 70 years, the camp’s mission has evolved. Nobles Day Camp is a summer enrichment program, where campers develop and practice life skills through experiential, engaging activities that build independence and self-confidence and encouragers all campers take positive risks and develop long lasting friendships with peers and adults.

“Ever since the summer of 1948, Nobles Day Camp has depended on our wonderful counselors, our concerned parents and our wonderful campers,” Parker says. “We have so much to celebrate.”

To learn more about Nobles Day Camp, go to noblesdaycamp.org.