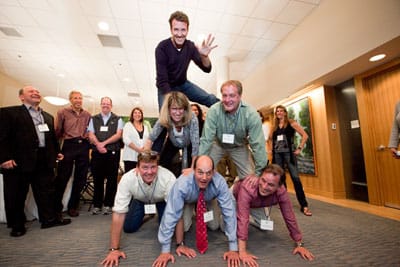 Blue and white were much in evidence as some 500 Noble and Greenough School graduates and their families converged on campus to celebrate Reunion on Saturday, May 14. Highlights of the day included Assembly, a kids’ street fair in front of Morrison Athletic Center, a sumptuous picnic buffet provided by graduates Jon Olinto ’94 and Anthony Ackil ’94 from their eatery, b. good, the second annual Athletics Hall of Fame induction ceremony, a preview of the spring musical and both student and graduate athletic contests.

Next, the girls’ a cappella group Greensleeves sang the National Anthem and Head of School Robert P. Henderson Jr. ’76 welcomed the returning graduates—including his own class—to campus. President of the Graduates Association Mark L. DeAngelis ’82 spoke of Nobles as “a lifelong journey. The relationships continue and sustain us throughout our lives.”

Just such a lifelong relationship was celebrated as members of the Class of 1986, gathered for their 25th Reunion, crowded on the stage to present the Coggeshall Award—to legendary teacher, coach and mentor Tim Coggeshall! When they discovered Coggeshall had never won the eponymous award, the class had the quickest selection process in memory, said Tim Kirk ’86. He described Coggeshall, who spent 40 years at Nobles, as “the greatest teacher of history I ever had…. Tim’s commitment to searching for truth could not be more important than it is today. He made us better citizens, better voters and better parents.”

In the evening, 10 convivial dinners meant that just about every space on campus, from the under-construction Castle to the Recital Hall, rang with laughter and conversation. (The 5th, 10th and 15th Reunion dinners were provided by SoulFire owner Wyeth Lynch ’96.)

Watch for the summer 2011 Bulletin for more photos from this annual gathering of graduates as well as details about the honors and distinctions awarded at Assembly and the Athletics Hall of Fame.