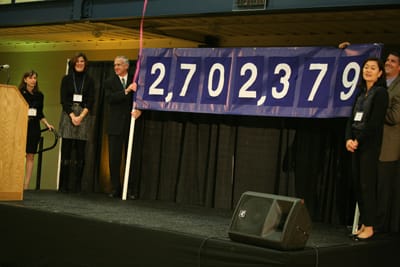 What better way to celebrate another successful fundraising year than to gather some 350 Nobles graduates, parents, faculty, staff and friends together for a social event? Nobles Night accomplished just that and more on Thursday, Oct. 27.

Head of School Robert P. Henderson ’76 began the evening with highlights (the recent Friday Night Lights game) and lowlights (local construction complicating the school commute) of the school year. He also updated everyone on the Castle project, confirming that it is on time, on budget and has raised nearly $12 million of its $20 million goal.

Nobles Night celebrates the early phases of the Annual Nobles Fund (ANF). Founded in 1930, the ANF is the school’s most important fundraising initiative, directly affecting students and faculty and touching all parts of the Nobles experience. The success of the ANF is, in part, thanks to the efforts of the ANF Parent and Graduate co-chairs and the 82-person 2011-2012 ANF Executive Committee.

Henderson presented the Richard T. Flood Award to Putty McDowell ’42 and Christine Hegenbart Todd ’84. Named in honor of the founder of the Annual Nobles Fund, the award is presented annually to the class agent(s) who has given outstanding service to the ANF. “Christine Todd is a remarkable development and graduate affairs volunteer,” said Henderson. “She has been involved with the ANF on many levels, including serving as an Executive Committee member.” Of McDowell, Henderson said he is a “loyal graduate of Nobles” and also adds that he “remains a great connecting force for his classmates, keeping them updated about one another and the school.”

The ANF co-chairs did the honors of unrolling the blue banner that unveiled the ANF tally of $2,702,379.

To learn more about the Annual Nobles Fund or to make a gift online click here.

Look forward to the Winter Bulletin for more on Nobles Night.