Chase Haylon ’15 Follows His Heart to A Career in Theatre 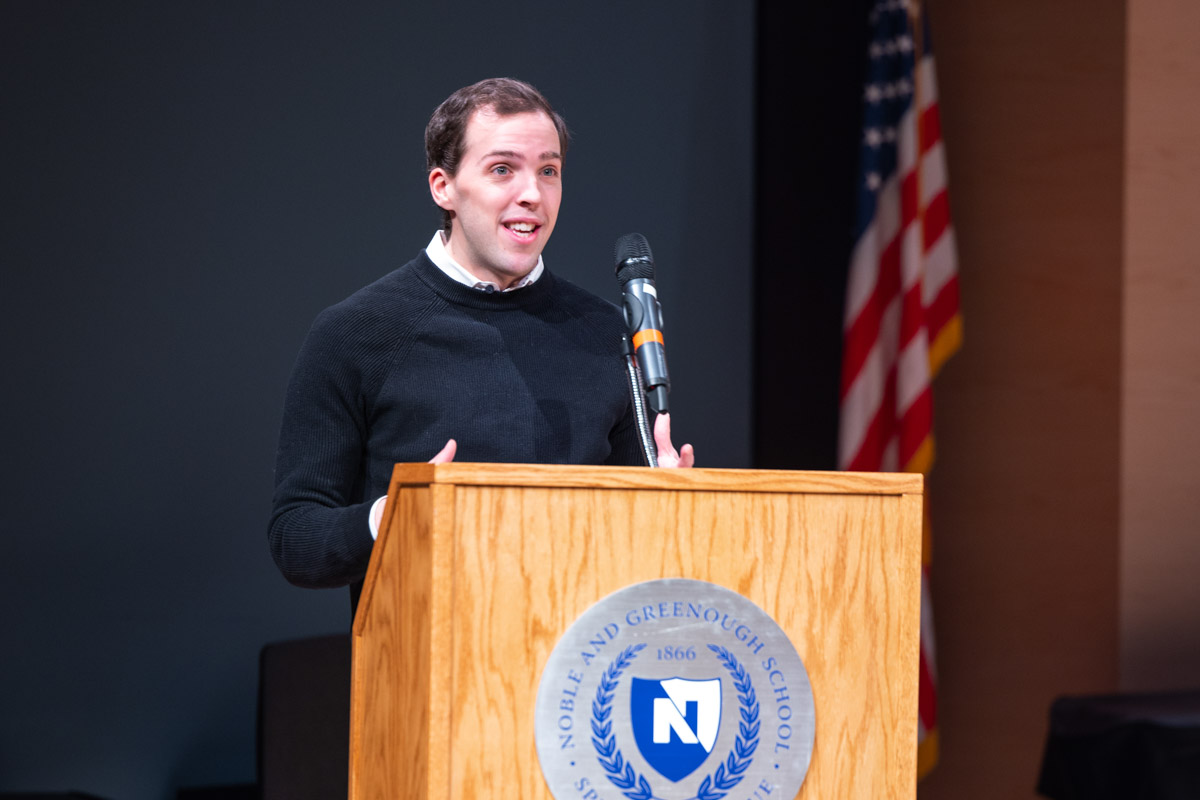 “Most Nobles students—including those who act and work backstage on many productions—go on to work in other professions,” said Director of Theatre Dan Halperin in his introduction of guest speaker Chase Haylon ’15. In this instance, however, Halperin had the opportunity to tell a different story—about the graduates who do go on to pursue theatre in college and beyond—and about the thrill of witnessing those once 12 or 16-year-olds build successful careers in the theatre, arts and entertainment industry.

Haylon returned to Nobles in January as part of the leadership speaker series to speak about his personal journey to becoming a social media marketer and creative producer, specializing in arts and culture institutions and live events. “Haylon’s many roles in entertainment,” shared Halperin, “have ranged from casting, marketing, and producing-assisting with Broadway shows such as Mean Girls, Diana the Musical, SIX, The Play That Goes Wrong, as well as TV series like FX’s “Fosse/Verdon,” starring Sam Rockwell and Michelle Williams, to movies, including the adaptations of West Side Story and In The Heights.” Currently, Haylon works at Situation Interactive, running social media for Broadway shows—including Wicked—and will be making his Broadway producing debut this fall.

Haylon opened his talk by showing a clip from the musical Stomp, an excerpt that he recalls being played in 6th grade whenever he had a substitute teacher for music class. Haylon explained that he would fall asleep out of boredom every time, because he just “didn’t get the appeal of people using brooms to make music,” despite the cultural phenomenon of the ‘90s where artists used non-traditional objects as percussion and transformed their sounds into art. The Sunday before coming to speak at Nobles, Haylon saw Stomp live for the first time and was surprised to realize how much the show resonated with him. “It made people laugh without using any words,” reflected Haylon. It was a complex percussive orchestra that imitated the world around me, but what really astonished me was how something this simple could be so impactful.” The entire show, he explained, could be distilled into three simple steps: find something that interests you, surprise yourself, and stay on beat. “This methodology,” said Haylon, “is what has provided me with some of the most rewarding experiences and growth in my own life.”

Haylon shared that while he was at Nobles he “was a theatre kid through and through,” hooked from the get-go by his experience in the middle school play. He went from planning to be a three-sport athlete to exploring every possible performing arts option that Nobles had to offer. During his semester at The Island School, having gained tremendous confidence from the experience, Haylon put on a play for his final project—something that would have previously been out of his comfort zone. Haylon brought that self-assuredness back to Nobles with him, to college at New York University (NYU) after that, and to everything that he has done since. To his own surprise, during his junior year at NYU Haylon realized that acting, in and of itself, was not his true passion. Already three quarters of the way through college and closing in on graduation, he was faced with a difficult decision.

Haylon knew that his career and his passion was nestled somewhere within the world of theatre, and when a friend told him about a little thing called “theatre management,” a world behind the scenes of Broadway shows that incorporated marketing, press, producing, and general management, he knew he needed to experience it for himself. Haylon began seeking out any job in theatre that he could—anything just to get into that world and start learning. Over time, Haylon set his sights on working for Broadway, starting out as a marketing intern for a producing office, which, while far from glamorous, finally allowed him to feel like he had a foot in the door and provided opportunities for networking that led to jobs in casting, producing, and general management. “I explored almost every job that existed in that industry,” said Haylon, until I had an up-close look at every single piece that creates what we think of as Broadway. As I stand her in front of you, I am still trying to challenge and surprise myself. Most recently, I decided that my next challenge was to be a producer. It’s a terrifying thought to be that person. To be the person in charge of everything. To essentially have the final say in everything that goes into a production. But that is exactly why it is exciting to me, and why I feel like I have to do it.”

Haylon then shared that if all goes according to plan he will be making his Broadway co-producing debut next fall with a new musical called How to Dance in Ohio. “The show,” said Haylon, “is about human connection, finding community, and, most importantly, challenging yourself to create your own unique path in the world while enjoying every single surprising obstacle along the way.”

Haylon left Nobles students with the following words of inspiration: “I strongly encourage you all to utilize your time here, challenge yourself to try something new, and take advantage of all of the unique opportunities that Nobles has to offer you. Even if you don’t like it or find it challenging, stay with it because it might surprise you.”