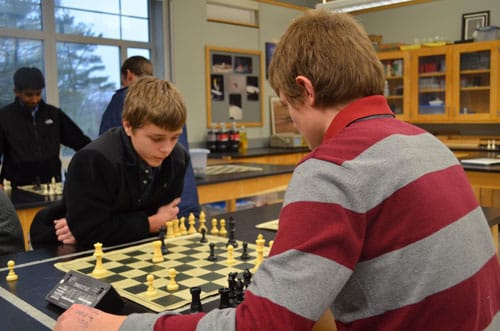 Congratulations to the Nobles chess team for winning the South Shore Interscholastic Chess League (SSICL) title. The team was undefeated in interscholastic play this year, and will share the league trophy with Roxbury Latin until next winter. (Both teams finished the season with 8-0-1 records and were named co-champions.)

On Mon., April 8, team captains Jett Oristaglio and Grant Rheingold, both Class I, presented the league championship trophy to Head of School Bob Henderson in Assembly. The trophy circulates among the SSICL schools (the winning team each season "owns" it until completion of the next season). Next year, the SSICL will complete its 50th season; Nobles first joined the league in 2010, and Noble and Greenough School has been engraved on the trophy's historical plaque for three of the past four seasons.

Two teams of Nobles students (one Middle School, one Upper School) will be participating in the Massachusetts State Chess Championship tournament on April 28, in Boxborough, Mass. Good luck, team!