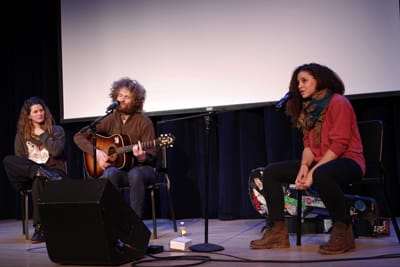 How many school communities get to enjoy an indie rock concert just after breakfast? During morning Assembly on Jan. 25, Noble and Greenough’s Lawrence Auditorium hosted Calling All Crows, an organization that uses music to inspire service in local communities and around the world.

Founded in 2008 by musician Chad Stokes (Dispatch, State Radio) and tour manager Sybil Gallagher, Calling All Crows has raised over $250,000 to empower women in Sudan and Afghanistan. They have also invested more than 17,000 hours of service in local communities across North America and Europe. During each tour, Calling All Crows organizes service or advocacy work on the road in communities from Austin, Texas, to their home turf in Massachusetts.

“It transforms the touring experience,” Stokes said. He was named Humanitarian of the Year at the Boston Music Awards in 2008.

Stokes shared a little about how he and Gallagher named the organization. He joked that he had considered Slingshots and Rope Swings; Calling All Crows ultimately won, he said, because crows “really look after each other as a species.”

Both Stokes and Gallagher talked about their commitment to women’s rights, marriage equality and other causes. Gallagher explained their organization’s focus on women, particularly women in developing countries, succinctly: “Communities are crippled when women are not empowered,” she said.