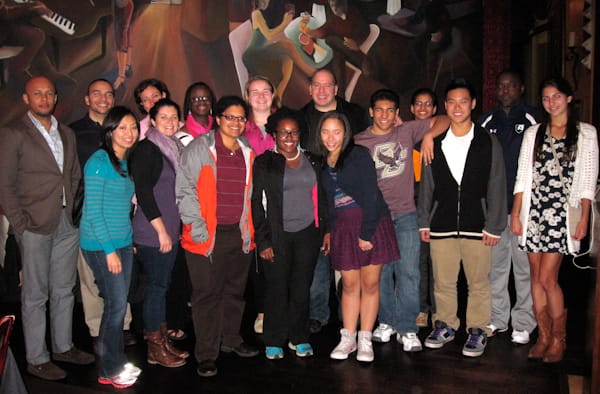 In early December, 10 faculty and staff members and six students joined more than 3,000 people at the 25th annual People of Color Conference (PoCC) and the 19th annual Student Diversity Leadership Conference (SDLC) for an invigorating three days of workshops, affinity groups, featured speakers and networking. The conferences are hosted by the National Association of Independent Schools (NAIS).

The meeting featured more than 65 workshops to help attendees build strategies for success and leadership, and to advance equity and justice around racial and ethnic identity in independent schools. Nobles faculty and staff attended workshops that included discussions about building inclusive communities through classroom curriculum and student programs, learning of one school's research study to understand and solve the achievement gap issue in its school; how culture influences communication; ways to teach social injustice and inequality without creating a racial divide; and ideas to incorporate discussions of identity, power and privilege in service learning curriculum.

In affinity group workshops divided by racial and ethnic backgrounds, participants shared stories of success and challenges and exchanged ideas related to life in independent schools.

Opening ceremony speaker Helene Cooper, White House correspondent for The New York Times and best-selling author of The House at Sugar Beach: In Search of a Lost African Childhood, shared stories of her time on the campaign trail with President Barack Obama and her journey writing a memoir about escaping the Liberian Coup in 1980, during which time Cooper’s father was shot and her mother was raped. Once in America at age 14, Cooper buried everything about her home country. “I spent the next years transforming into an American teenager. If I became less Liberian and more American, I would be able to adapt.” Cooper discussed her journey traveling back to Liberia to find her sister and the emotional rollercoaster of writing a book that unveiled buried memories. Cooper’s first draft included little emotion and detail. “I was still trying to protect myself,” she says. It took Cooper three additional years to complete her memoir, allowing vivid details and profound emotion to emerge.

Other speakers shared empowering stories of challenges and triumph. The speakers included Dan Choi, a gay Korean American Iraq Veteran who served for a decade under “Don’t Ask, Don’t Tell,” policy; Kim Phuc Phan Thi, subject of a Pulitzer Prize-winning photograph during the Vietnam War and founder of the Kim Foundation, which provides medical and psychological support to children who are victims of war; and Bernard Harris, the first African American to walk in space and founder of the Harris Foundation, which supports math and science education and crime prevention programs.

The Student Diversity Leadership Conference (SDLC) challenged students through discussions in “family groups” where they bonded with a range of student leaders from around the country. The workshops focused on self-reflection, developing allies and community building. Students discussed issues of sexual orientation, race, socio-economic status and religion and learned techniques for leading conversations about diversity issues in their schools.

“By the end of the second day, I truly did understand why they called it a family group as through sharing we all came to understand each other,” says Grant Hou ’14.

“POCC and SDLC have positive impacts our community and I am proud to be a member of the think tank that helps plan these conferences,” says Steven Tejada, dean of diversity initiatives. “They provide important opportunities for our students and faculty to network with others committed to diversity work at their respective schools. Faculty and students are able to develop new connections, share information about our diversity initiatives, and walk away with many resources that they bring back to the Nobles community.”