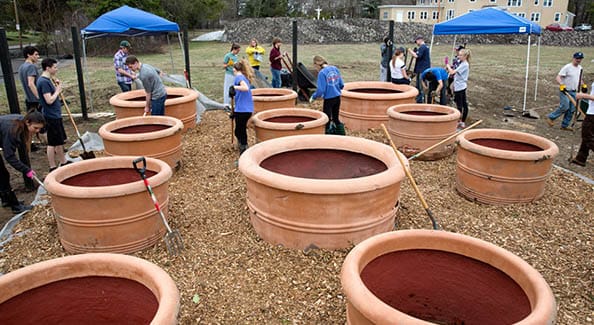 On April 14, 2015, Nobles celebrated an all-school, day-long community service effort—Common Fire, named for the book, Common Fire: Lives of Commitment in a Complex World. The school came  together to serve at 65 sites from Dedham to Boston and beyond. Mark Gearan, president of Hobart and William Smith Colleges and former director of the Peace Corps, addressed more than 800 students, faculty and as they practiced leadership for the public good at Habitat for Humanity, the Natick Community Organic Farm, Walker School, Shattuck Hospital and many other locations.

“My message today is a pretty simple one— why you should make service part an everyday part of your life,” Gearan said. Nodding to Sargent Shriver, a driving force in the 1962 creation of the Peace Corps, Gearan said that given all of the technological advances of our time, it’s easy to forget that there men crouching all day to catch a fish as big as a thumb, or still plowing with a stick.

He said that members of the Peace Corps are now serving in countries that didn’t exist. “Any Peace Corps volunteer will tell you that they learn as much as they teach [when helping others].”

Gearnan also urged students to become engaged in civic matters and to understand the relevance of government, in addition to their focus on service. “I would argue that our obligation is great. Service in the 21st century is part of the deal.”

Nobles’ commitment to service is rooted in the school’s earliest days. Today, every student is required to perform at least 80 hours of community service before graduation. Most exceed that requirement. Sandi MacQuinn and Linda Hurley, who lead the school’s service program, and trustee Holly Bonomo ’86 organized the effort at the many sites, which included some of the following work:

Lindsay Casavant, outreach director at the Cotting School, expressed the perspective volunteers gain when they serve. “It opens up their eyes to a world of diversity in terms of students their own age and their abilities. A lot of students who aren’t familiar with Cotting come in with a preconceived notion of what Cotting students are like and by the end of the day, having met a few students, they will have something really concrete to go on.”

Those who volunteered to sort through donations at Cradles to Crayons (provides children from birth through age 12 in low-income situations with essentials they need to thrive) shared, “For the majority of the day we were checking the quality of donations, and it’s great to see that they really want their recipients to get the highest quality of clothing to boost their self worth and confidence. It's amazing that after emptying an entire cart of clothes, another one is waiting right behind it. It shows the dedication of the community to helping those in need.”

Associate Director of Admission Cassandra Velázquez was part of the Nobles team furnishing an apartment for a family moving from a shelter, since their last place burned down, and all their earthly belongings with it. “My most memorable part of the day was when Yari (the 15-year-old who was ‘moving up and out’) asked me who we were. When I said we were from a school, she asked, ‘but who are the teenagers and why are they here?’ I said that they were volunteers, and followed up with, ‘Why? Do you want to do this someday too?’ And she immediately said, ‘YES!’ So, Heading Home has their next volunteer in Yari!”

Common Fire was the official kick-off to Nobles’ sesquicentennial celebration. The school's 150th year begins in the fall of 2015.