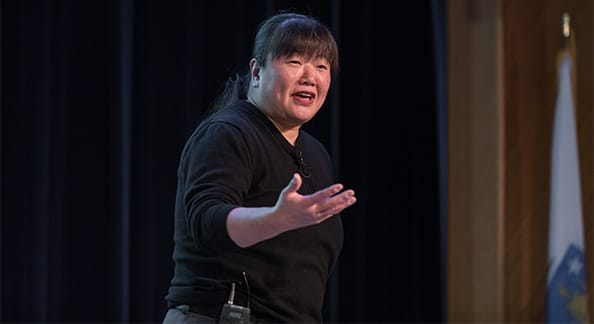 On Wednesday, April 18, diversity speaker and trainer Rosetta Lee, a science faculty member at the Seattle Girls’ School, spoke to the Nobles community in assembly about how to have courageous conversations in divisive times. She also held a question and answer session in Towles, and visited classes throughout the day. Lee’s areas of expertise include cross-cultural communication, gender and race issues, coalition-building, identity development and anti-bullying. In socially and politically complex times, Lee’s hope is to foster constructive dialogue and help people with different perspectives to create bridges of respect and understanding.

As an educator, Lee embraces a holistic approach. She teaches about race as a social construct when explaining DNA in biology, and brings up unequal access to healthy food resources when talking about nutrition. She challenges her students to think about making the world a more equitable place.

For students at Nobles, Lee asked, “As you engage in all topics of conversation, how do you engage across difference…race, gender, class, sexual orientation or another?” Admitting there is no handbook and that experience is the best education, Lee praised the courage of those who don’t know if they’re saying the “right” thing, but also know that silence isn’t the option. “Courage is a combination of vulnerability and risk,” she said.

“The world and mainstream culture sets us up not to be courageous,” Lee said. She debunked false constructs like the “all or none” myth that labels people as either inclusive or bigoted, right or wrong. Those judgements discourage people from asking questions and learning. She also emphasizes the value of making mistakes: “Humble and curious interactions lead to cultural competency—misstatements about identity and difference shouldn’t be equated with one’s moral worth.

In doing this work, we are bound to inadvertently hurt each other. “It is perfectly possible to mean well and still create a negative impact,” Lee reminded. Brain scans show that psychological and physical pain are experienced in the same area. Inflicted unintentional psychological pain is real. But, she said, with practice, one can learn to be graceful when those moments of imperfection happen. A willingness to be vulnerable can lead to rich rewards: joy, love and authentic connection.

One important distinction Lee made was between “safe spaces” and “comfortable spaces.” A safe space, she explained, is one in which one can ask questions without fear of judgment, voice one’s perspective and feel validated that that is one’s truth. Comfort, rather, is the sense, “In this space, my reality will be agreed upon.”

True dialogue happens, said Lee, when one feels safe but uncomfortable—challenged to push to a new level. To move conversations from safe to brave, the process must include:

The key to gaining understanding is engaging in dialogue instead of debate, and being supportive rather than defensive. Dialogue is collaborative; one temporarily suspends one’s beliefs to comprehend and reveal assumptions for evaluation—rather than becoming oppositional and seeking flaws.

She challenged Nobles students, as the next generation, to hold on to hope, despite the problems they have inherited: “Engage courageously—believe in power and the excellence of diversity for our survival.”

Lee’s final advice for engaging across differences included the willingness to:

This morning, April 20, marked Nobles’ participation in the National School Walkout for gun sense, during which some Nobles students participated in diverse discussions. Lee’s visit was a timely tool in respectfully approaching those opportunities to share ideas.