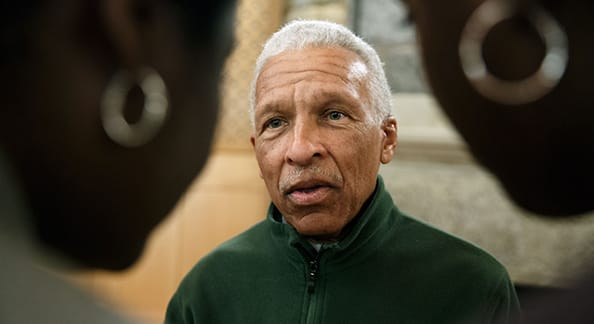 A Time to Come Together

November 16, 2016, was a historic night for Nobles; it marked the First Annual Family Dinner, the largest gathering of people of color in the school’s 150 years. Despite 240 guests who overflowed the dining hall, the atmosphere felt intimate and the mood, buoyant. From the graduates, families and students, to faculty and staff who came together, everyone had one reason for coming: to connect. That was the vision of Devin Nwanagu ’05, a beloved Nobles graduate who was part of the development office team when she unexpectedly passed away in December 2014. As Nwanagu’s hopes were honored, so was Nobles’ first graduate of color, Bob Pinderhughes ’67, who shared a glimpse into his past at the school.

Co-Deans of Diversity Edgar De Leon '04 and Erica Pernell described Nwanagu’s vision and impetus for the gathering, their work at Nobles, and some historical and social context of Pinderhughes’ attendance at the school. Then, mixed tables of graduates, current families and students, faculty and staff took turns to share and listen to each others’ stories of identity spanning cultures and generations.

Just one week after a presidential election met by a spectrum of passionate reactions, many among Nobles’ community of color expressed that the timing of the event couldn’t have been better. The long-planned dinner was originally expected to have a turnout of about 50. The five-fold increase of guests belied a deep desire for connection, and the thoughtful program by De Leon and Pernell laid the groundwork. Director of Graduate Affairs Greg Croak ’06 cares deeply about the vision his friend Nwanagu sought to fulfill, and has worked on behalf of the graduates of color committee; he was instrumental in making the event possible.

De Leon said, “Today is a recognition of the greatness that people of color have brought to this place over the last 50 years. Tonight also marks the beginning of the next 50 years. Just as Bob Pinderhughes’ bravery shaped this place, our bravery in this current moment will shape Nobles forever.”

Reflecting on the event, Pernell said, “It was an incredible multigenerational gathering that reminded us all that our struggles have not changed—that we still share them—and that we also share the joy that comes out of resilience.”