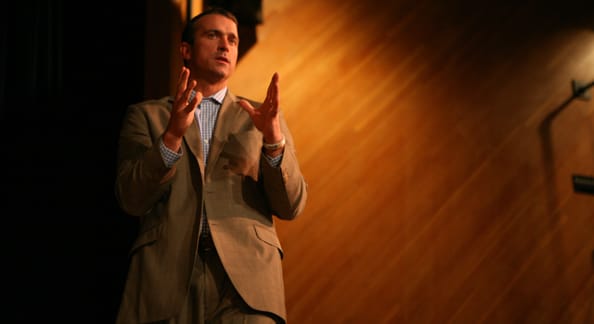 He told the audience that, at age 22, instead of relishing in the press conference announcing that he would start as the Celtics point guard, “The only thing I cared about was ending the press conference,” he said. “I was trying to find the kid with the yellow pill,” he said, referring to a former Fall River schoolmate who introduced Herren to Oxycontin.

Herren, whose addictions included alcohol, Oxycontin, Percocet, cocaine, marijuana and heroin, said he set out—while playing hoops in his driveway as a kid—to become a Celtics player, not a junkie.

He recalled how, throughout the years, he had heard speeches warning students and student-athletes of the perils of addiction but thought that those warnings were for the other people. “'I only drink and smoke,’” he used to tell himself. “’My mommy and daddy work. [This] doesn’t pertain to me.’”

Herren, whose early storied basketball career landed him on the pages of Rolling Stone and Sports Illustrated, recounted a police officer saying, “The problem? The problem is you overdosed.” He also recalled a five-day cocaine and heroin binge with a friend who was later executed for a drug-deal-gone-wrong on a night when Herren had been invited to join the party. Herren said he spent about $20,000 a month on prescription drugs when he played professional basketball. He said his wife learned of his secrets when she opened a Paine Webber financial statement and couldn’t account for more than $300,000.

About 10 years ago, Herren did not show up at the airport to meet his wife and children. Instead, he spent his last $17 on alcohol that he shared with a homeless man; he said he slept between a dumpster and a barbed-wire fence for two nights. When he saw his young son, his son wouldn’t look him in the eye and only said, “How come you don’t want to be my daddy anymore?’”

Herren tried to commit suicide, and he was also pronounced dead from an overdose before being resuscitated. Later, when a friend paid for his six-month stint in rehab, the counselor said to Herren, “‘Of course you lost your family, son. That’s what addiction does.’”

As of April 2013, Herren has been sober for nearly five years. He started Project Purple [http://goprojectpurple.com/], an initiative of the Herren Project, a nonprofit that supports sobriety and young people and families in recovery. He told the Nobles audience that every 19 minutes, someone in this country drops dead from popping pills. “The choices you make today might seem innocent [but they matter],” he said. “Don’t change who you are for anybody.

“I used to think faith was a weakness.” Now, Herren cites his wife’s strength—“second to none,” he said—and his choice to expose all of his secrets in an effort to battle the stigma that addiction brings. “You are only as sick as your secrets,” he said. “Once I started sharing [the hard stuff], I started getting better.”

He also said that he is often asked about throwing away his professional basketball career and how that feels. “I almost threw my kids away,” he said. “Who cares about the Celtics?

“Recovery brought me that peace.”

Herren urged students to help those they care about get treatment. He cited not only substance abuse but also self-harm as an addiction for which young people need professional help. “Tell on each other,” he said.

“Whatever your dream is, you cannot achieve or maintain your dream if you stop being you.

In addition to his Assembly talk, Herren met with students, faculty and staff in Towles Auditorium for a question-and-answer period. He said that he spoke last year to at least 150,000 young people about substance abuse and how, literally, he came back from the dead.

“What makes you special can also drag you down,” Herren said.