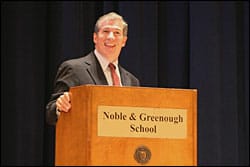 The start of the 2011-’12 school year was marked by both excitement for new beginnings and familiarity of tradition. During a week of “firsts”—the first day of classes, first Assembly, and other inaugural events—Nobles celebrated its history, beginning with the return of a tradition which stopped in the ’80s: the ringing of the morning Assembly bell by a member of the Sixth Class. Matt Abate, Class of 2017, had the honor.

Following another tradition, President of the Board of Trustees Jeffrey Grogan ’74 addressed the Nobles community during the year’s first Assembly. He reflected on talks he has given in years past, which have included topics of fresh donuts, the Winter Olympics, Naval ships, the Pan-Mass Challenge and the inspirational messages drawn from these stories. This year, he posed a question: “Why are you here at Nobles?” He pointed out that the answer was most likely a combination of factors and that, hopefully, the experiences each student has at Nobles will leave a positive, lasting impression.

Head of School Bob Henderson Jr. ’76 also welcomed students, faculty and staff during Assembly. He, too, referred to the school’s history and talked about the tradition of establishing principles through more than 100 years of mission statements. He reiterated the current community principles as expectations for the year ahead: honesty, respect for others and respect for self.

Later in the day, students returned to Lawrence Auditorium after their first day of classes (for the Upper School; Middle School students participated in the second day of their two-day retreat) for a special afternoon Assembly, the first of it's kind. Chicago rock and soul band Lubriphonic performed and captured the excitement palpable throughout the day. Students sat in their seats enjoying the show,  knowing there was much more to come this year.