Friend to Creatures Great and Small 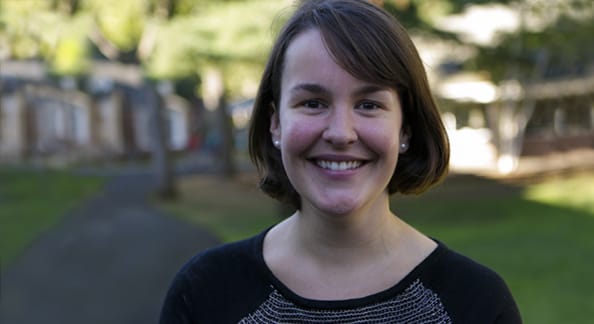 At Assembly on Monday, September 22, Head of School Bob Henderson welcomed Dr. Meagan Rock '99 to the stage and shared the following introduction, prior to presenting her with the 2014 Young Graduate Award.

Since 2011, the Young Graduate Award has been given annually to a recent graduate (up to 15 years out) who models the spirit and values of Noble and Greenough School as set forth in our mission. Through professional, academic, and/or volunteer roles, the recipient has demonstrated leadership for the public good and a commitment to serving others.

"Meagan Rock has faithfully dedicated her life from a very young age to the promotion and protection of the relationship that humans and animals share. As director of the MSPCA Animal Care and Adoption Center of Boston, she displayed a high level of managerial competence in order to effectively care for the most vulnerable animals in her community. Her work as case manager for more than 400 HIV positive clients and their companion animals with the Phinney's Friends Program further testifies to her altruistic commitment to the public good. Now, as a Doctor of Veterinary Medicine, she is continuing to live her passion for serving human and non-human animals alike.

As a teen, Meagan volunteered regularly at her local animal shelter in Brockton because she felt that, “Nobles inspired an honest commitment to service and helping others. I felt challenged to go do great things, to take risks, to be a good person who made a difference in the world – and
so I accepted that challenge wholeheartedly.”

Meagan became trained in their animal care and adoption programs and, instead of the 80 hours required by Nobles for graduation, completed over 2,000 hours of service at the MSPCA in Brockton. After Nobles, Meagan attended Tufts University and graduated magna cum laude as a philosophy major: “I was told that I wasn’t good at science while studying at Tufts. But, Nobles had instilled a solid critical thinking skill set in me which helped me thrive as a philosopher. It was a wonderful undergraduate study, but having always wanted to be a veterinarian, I had to take a risk to reinvent myself in a way that did not involve being a veterinarian. This was challenging, but filled with great opportunity.”

After college, Meagan was chosen as the program coordinator for the MSPCA's "Phinney's Friends," which is dedicated to helping low-income individuals with disabling illnesses or other hardships maintain their bond with their companion animals by providing assistance with everyday pet care. She provided the aid to over 400 clients suffering from HIV/AIDS in this valuable program, managing all aspects of the volunteer training program that provided these services. A year later, the Boston MSPCA ended up asking her to be the assistant manager of the busy Boston Adoption Center, where Meagan was noted for her organizational and teamwork skills as they worked through a massive capital campaign, building expansion, and staffing increase. Meagan developed outreach, education, public relations, and marketing materials that showcased the positive benefits of relationships to animals, specifically shelter animals.

Meagan was soon promoted from assistant manager to director of the MSPCA’s Adoption Center. In this role, Meagan directly managed all aspects of the daily operation of a shelter that helps over 6,700 animals per year – ranging from dogs, cats, and rabbits to reptiles and birds, and hamsters and wildlife. Having come full circle, she now oversaw their shelter’s volunteer program which had over 450 active volunteers. The intrinsic high regard the community has for the MSPCA’s Animal Care and Adoption Center in Boston can be traced to many clear policy decisions and the decent, consistent execution that Meagan helped foster.

Meagan, however, never lost the spirit or dedication to wanting to help individual people and animals through veterinary medicine. While working full time, she took science pre-requisite classes: “It turns out that I was pretty good at science. Now was my time!”

Meagan was accepted into the Class of 2014 at the Tufts Cummings School of Veterinary Medicine, where she undertook the grueling program of learning veterinary medicine from some of the top scholars and clinicians in the country. Meagan graduated with honors in May of 2014 and is now completing an internship in small animal medicine and surgery at the Angell Animal Medical Center. “This internship is one of the hardest and most demanding in the country. This is why I wanted to do it – the experience is unmatched anywhere else.”

The Angell Animal Medical Center literally shares a wall with the Boston MSPCA Animal Care and Adoption Center. Meagan has returned to the place where it all began: “Being able to practice veterinary medicine at the MSPCA-Angell is a dream realized. The MSPCA, and the values that they represent, have been a part of me since I was 15 years old. Combine this with the honest lessons and enduring support that I have received from Nobles faculty and my family and this magic becomes real. I encourage you to never stop taking risks or believing in your own ability to make the world a better place. Take advantage of this wonderful opportunity that you have by virtue of being a Nobles student and harness it to make a difference.”