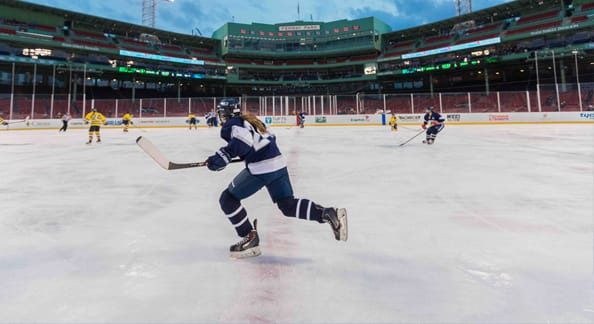 Laing was playing a historic game for women’s hockey at Gillette Stadium when she lost her footing and crashed into the boards, shattering her C5 vertebra in the front and fracturing her C4, C5 and C6 in the back. Her recovery has been long and difficult, but she faces every rehabilitation session with unwavering hope and her characteristic smile. She has been an inspiration to many, winning the National Women’s Hockey League Foundation Award and Perseverance Award, and, most recently, the Dana Reeve Hope Award.

One year after the accident, 13 buses carried Nobles students and faculty to support Laing at Frozen Fenway. Nobles’ all female a cappella singing group, Greensleeves, performed the national anthem to a crowd of tightly bundled supporters. Laing, announced as “an inspiration to all of us and the reason we are here today,” rolled onto the rink and dropped the puck to start the game. Both teams took the rink wearing Laing’s Boston Pride number 24, each jersey labeled “Denna Strong.”

Nobles carried the play in the offensive zone for most of the first period, leading to the game’s first goal, scored by Becca Gilmore ’17. She scored again at the start of the second period, with an assist by Lily Farden ’19. BB&N’s goal at the end of the second period brought the score to 2 against 1, in Nobles’ favor, at the start of the third period of the game. In the final period, Courtney Hyland ’19 scored, assisted by Danielle Brown ’17. Within a minute, Becca Gilmore scored again, earning a hat trick and bringing the scoreboard to its final position, 4 against 1, with Nobles earning a win for the exhibition game. Nobles goalies Kelly Pickereign ‘18, Emma London ’18 and Taylor Hyland ’19 played one period each and had a total of 22 saves.