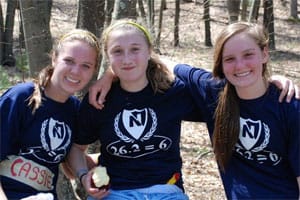 The beautiful Patriot’s Day weather set the tone for a terrific turnout at the Nobles Marathon Event on Monday, April 18. Spectators gathered in Wellesley to watch and cheer as the Nobles Team of more than 65 students, graduates, faculty members and parents took to the course for the 115th Boston Marathon. In the early hours, a group of half- and full-marathon runners set off for the starting line in Hopkinton. Later that morning, the quarter-marathon runners began their race from Framingham to the Nobles finish line in Wellesley, while faculty members Ben and Sarah Snyder led a biking group on a loop around surrounding towns. Meanwhile, the Girls’ Crew Team participated in the Newton-Wellesley Hospital Erg Marathon, rowing a 26.2-mile relay to support the hospital’s breast cancer screening program. The fund, established in 1985 by Bill Bliss ’48 P’79 ’80 GP’10 ’14 and Elise “Butch” Wallace P’77 ’78 GP’13, has raised more than $30,000 this year.