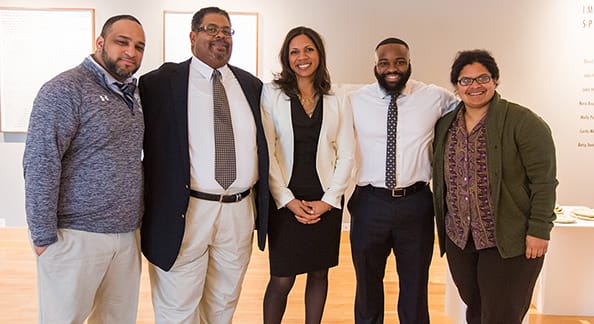 On February 1, the first day of Black History Month, it was more than fitting that three accomplished Nobles graduates of color would share their stories at morning assembly. Co-Deans of Diversity Edgar De Leon ’04 and Erica Pernell introduced Kevin McCarthy ’74, Kasib Sabir ’03 and Lorna Lowe ’90, each of whom they had invited “to tell a story about an experience that helped them develop a sense of identity during their time at Nobles.”

Pernell expressed gratitude for the wisdom to be gained from four decades of experience, and said, “Developing a sense of identity is the main challenge of growing up. Figuring out who you are and how to be authentic in a world that is divided and full of pressure is not easy.”

De Leon said, “We encourage you to think about what common threads weave the stories together and what unique moments set them apart.” De Leon and Pernell have incorporated the storytelling theme throughout their first year as partners in Nobles’ diversity efforts, from their work with students and faculty, to welcoming families and graduates, as they did for November’s Family Dinner. The event was the largest gathering of Nobles’ community of color in the school’s history.

McCarthy, the first speaker, works to improve the lives of individuals living with mental illness and addiction as a psychotherapist and clinical social worker. He also serves on the board of Heading Home, Inc. to provide housing and services to homeless families in Greater Boston, and on the board of the the Massachusetts Organization for Addiction Recovery. In the spirit of the Nobles mission, McCarthy also mentors young people seeking opportunities in fields of social service for the public good.

McCarthy recounted early morning devotionals as a boarder with former Head of School Eliot Putnam, whose faith in McCarthy’s character and work ethic kept him going. He cited science teacher Fred Sculco for showing him “as much as Nobles is steeped in tradition, they also understood that they were preparing us for a future that was very different.” McCarthy, who has formed lasting friendships within the Nobles community, says the most significant thing he’s learned about character at Nobles is “to be intentional about how you treat the people around you, because you have no idea what that person is going to mean to you five, ten, fifteen or twenty years down the road…I thank Nobles for the core of my values that I keep close to my heart.”

Sabir, who spoke next, has worked as a case manager for Boston’s impoverished communities at Action for Boston Community Development, and now serves as program coordinator for the Boston Public Health Commission. He addresses health disparities that impact Boston’s high school students by raising awareness about sexual health. As a performance and visual artist (his hip-hop name is Skip Grizzly), his work centers on personal narratives and social issues.

Sabir shared memories of growing up in Boston, in a loving, devout Muslim family. Like McCarthy, he boarded at Nobles and fondly recalls the friendships he formed with fellow students and teachers like the Harringtons. He flourished in the arts program, and thanked visual arts teacher John Dorsey for his support. He screened his recent hip-hop video, “O.D.” to demonstrate his current work.

Lowe is a filmmaker and lawyer based in Boston. Prior to producing social issue documentaries, she worked at MTV, E! Entertainment Television and Sony Pictures. After earning her law degree from the University of Southern California, she tested several paths, including representing adults in parole hearings in California’s maximum security prisons, arguing for asylum for children crossing illegally into the U.S. and studying international law at the Sorbonne in Paris. Her current legal practice represents children in the foster care system. Lowe’s daughter, Sophie Streeter, is a member of the Class of 2022.

Lowe shared that as a student at Howard University in Washington, D.C., she realized that, despite her assumptions, the historically black institution was actually the most diverse place she had ever been. While at Nobles, Lowe regrets that the discriminatory experiences her own black family members endured in the 1930s prevented her from forming some friendships because she viewed the school community through a lens of suspicion and fear. Now, she advocates “leaving those lenses at home and doing one’s best to view people with fresh eyes.”

Pernell asked the speakers about lessons they hope young people will take with them given “the current state of our nation.” Sabir encouraged being aware of the unique access and opportunities they enjoy, and to think about ways in which they can see “how the other side lives.” McCarthy emphasized the importance of everyone understanding what “privilege” really means. “This [Nobles] experience is not a common experience for an average adolescent. When you meet another human being as you go through life, you need to meet them where they’re at. Healing and the change that happens in our world happens one relationship at a time with those people who have the courage to find somebody that everyone else is uncomfortable with and become important in that person’s life. It’s easy to be part of that mob that moves toward the popular. The challenge is to develop an identity where you stand on your own principles.”

Lowe added, “This, to me, is an extremely exciting political time…I think of the United States mostly being a nation of immigrants, aside from Native Americans. Every immigrant family has their story of fighting for freedom and access. Beyond those material things, it’s been the freedom to be self-defining, whether in terms of your religion, your beliefs, your ideologies or your politics. This election has woken folks up who may have been dozing off a little. The excitement is we’re all sort of sparked in some way. We have the unique opportunity to live in a country where, for the most part, we can be self defining—so I’m hopeful.”

Following the assembly, throngs of students and faculty gathered in Foster Gallery to speak with the graduates, ask questions and welcome them back to campus.