In the Classroom: Activism Then and Now

by Noble and Greenough School
Uncategorized May 7, 2014 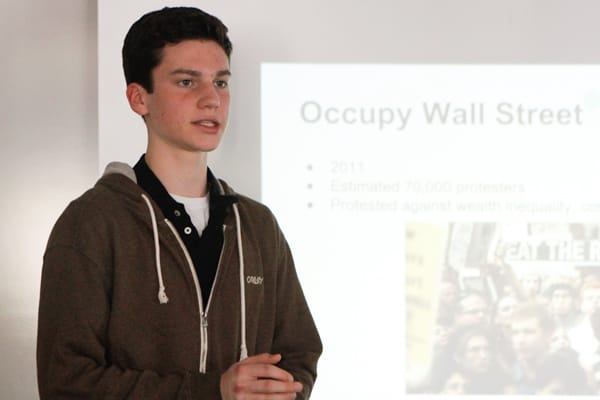 Students in faculty member Mike Kalin’s U.S. History class completed a research paper comparing an activism movement in the U.S.—between 1980 to present day—to the civil rights movement. On May 2 and May 5, students reported their findings to the class.

The research focused on finding critical historical details and strategies of the activism movements and comparing the similarities.

“The project is the culminating experience for our civil rights unit during which students studied strategies, including sit-ins and boycotts, that American civil rights leaders employed in pursuit of political, social and economic changes,” says Kalin. “It required students to identify strategies that were used by both leaders in the civil rights era and leaders of contemporary activist movements.”

Maxwell Halperin ’16 reported that the civil rights sit-ins and Occupy Wall Street sought to achieve sociopolitical change through civil disobedience, incidentally attracting the media as well as violent attacks. He compared the violence that ensued: “African Americans who protested by sitting-in were often victim of racist brutality… sit-in students in Nashville were attacked by a group of white teenagers. The Occupy movement also faced consistent police brutality during its time in Zuccotti Park. Many members of the movement were pepper-sprayed and beaten with police batons throughout the protest.”

Mariana Vega ’16 discovered that both powerful public protests and extensive media coverage assisted in the success of the movements she studied. “Pro-life advocates are some of the most passionate protestors, echoing the brazen demonstrations of the civil rights movement by arranging their own public events… The importance of these events was that they resonated with the public, allowing for the spread of awareness and determination for the cause,” she wrote in her paper.

Common finding? Movements fight for equal rights, and media can play a significant role in the success of activism.

“By the end of the project, we hope that students recognize their own potential as agents of social change,” says Kalin.