In the Classroom: The Impact of War 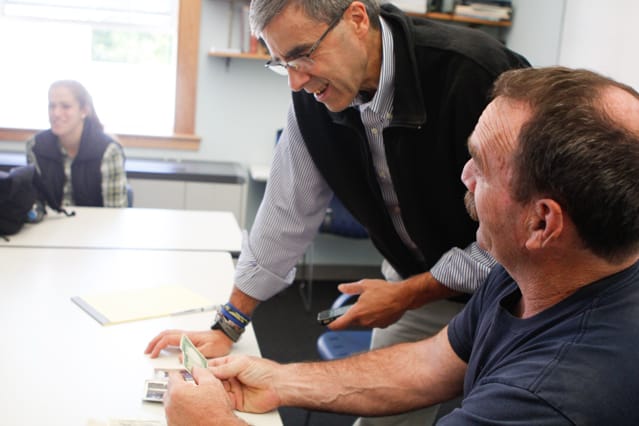 What was war and its aftermath like for Vietnam veterans? Students in Ben Snyder’s Vietnam class spent this week covering topics such as the platoon, My Lai massacre and Tet Offensive. On Friday, Oct. 11, students listened to a first-person account from local Vietnam veteran Bob Lynch.

Lynch shared stories of being in jungle warfare as a U.S. Marine. “My job was basically to search and destroy,” he says. “Anything I saw, I had to destroy and bring back information.” Lynch tells students that he was on patrol duty “out in the bushes” for about 300 days of the year. When it rained, “it poured sideways” and the 75-pound bag carried by soldiers felt like 125 pounds from the weight of the water.

One student asked Lynch, “In Vietnam, did you and your friends believe in the cause or were you following orders?”

“I wasn’t drafted,” he says. “I found that a lot of the guys who were drafted were against the cause.” Lynch was young and admitted to being a bit fearless. He reenlisted for the second tour.

Until this day, memories of women and young children killed are still vivid. “These are the images that I cannot shake,” he says.

Lynch shared that the hardest part of coming back to the United States was rejection and feeling animosity from fellow Americans. “We were known as the bad guys,” he says. “I was ashamed to be a U.S. serviceman.” Earning a job in the states was difficult for anyone with a military status, so Lynch quickly learned to leave out that information from his employment history.

Lynch suffered from post-traumatic stress disorder for many years. Not long after his return, he was homeless, suffering from substance abuse and living on Boston Common.  “My parents couldn’t deal with me,” he says. “I had a lot of problems.”

Other veterans also found hardship, but rehabilitation services were not available.  “There’s well over 100,000 documented suicides in the U.S. from Vietnam veterans,” he says. “By the time I turned 30 years old, I lost close to 30 of my friends through suicides.”

Today, Lynch still feels the long-term health affects from chemicals such as Agent Orange. Snyder tells students that in addition to soldiers, “Millions of Vietnamese are dealing with the impact of Agent Orange,” especially children of mothers exposed to the chemical.

Lynch lives in Dedham and is the property manager for Brockton Housing Authority. He has returned to Nobles to tell his story to the Vietnam class for more than 10 years.