In the Classroom: Why Pray to Apollo? 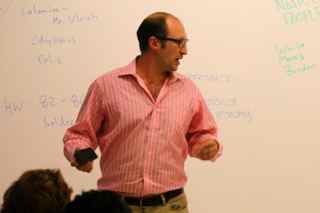 In Ancient Greece, the primary text in the eponymous class taught by faculty member George Blake, Greek colonization during the Archaic Age (roughly 700-480) gets just several sentences of explanation. Luckily, fellow classics teacher Dave Ulrich spent his summer immersed in research on Greek colonization. On Oct. 2, he visited Blake’s class to share insight on the subject.

“What comes to mind when you think about colonization?” Ulrich asked students. They wrote on the board “white man’s burden,” “oppression,” “separation,” “religion,” and “resources.”

Ulrich said that many of the words and ideas we connect with colonization relate to the colonization of Africa and Asia in the 1800s.

In ancient Greece, the move from the mother city or “metropolis”—to colonies that reached from Spain in the west to the Black Sea in the east—was inspired by overpopulation, civil strife and commerce. (Ulrich noted that Aristotle’s five ways to make a living—pastoral farming, arable farming, piracy, fishing, hunting— likely added a layer of motivation.)

Ulrich explained that archaeological evidence—along with a dearth of written sources—has kept controversy alive among scholars over aspects of the colonization such as the impetus to leave Greece’s rocky shores, whether the settlers assimilated to the new lands or imposed their way of life on natives and the nature of their relationship to the mother city: many colonies surpassed the motherland in wealth and broke ties over time.

Ulrich challenged students to consider what the oikistes (founder) of a colony might seek in apoikia a (colonies), what settlers might hope for in their leader—might, intelligence, fairness—and what the process of colonization might look like.

In addition to more practical concerns, consultation with the Oracle of Delphi, praying to Apollo and cult worship were important elements of the colonization process.

After receiving the blessing and guidance from the oracle, the colonists traveled with the sacred fire to distant shores where they built walls, temples, homes, necropolis and allotted plots for subsequent waves of migration.

“Apollo is the go-to deity if you’re going to found a colony,” Ulrich said.