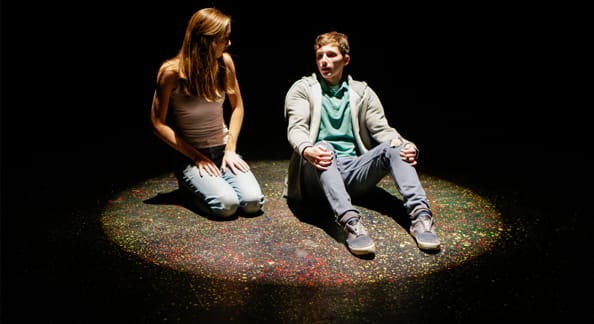 In July 2013, Corey Ann Haydu ’01 debuted her first young adult novel, OCD Love Story, which was chosen as a Junior Library Guild selection and earned a nomination for best fiction for young adults by the Young Adult Library Services Association.  Now, in October 2015, the stage adaptation of Haydu’s story premieres in Vinik Theatre at Nobles. The show addresses anxiety disorders through Bea, a student from Greenough Girls Academy; it runs October 28-30, at 6:30 p.m., and October 31, at 2 p.m.

“I had never thought about it,” says Haydu of adapting her novel for the stage. Dan Halperin, director of theatre, asked Haydu to consider it when she visited campus shortly after the book’s publication. The two began to collaborate, considering the challenges and opportunities of taking a first-person narrative—with a lot of internal dialogue—and making it work as live theatre.

Haydu, who began acting at age 8 and studied theatre at Tisch School for the Arts at New York University, says that this project has really brought together her two passions in a way she didn’t expect. “It’s been awesome. I’ve been able to come full circle.”

Haydu, whose fourth novel was published in September, says she loves writing for teens. “It’s a period of time with so much going on. Being a teenager is really hard. You don’t have to work to find the conflict,” she says.

In print and now on stage, Haydu helps the audience begin to understand OCD and how it interferes with daily life. When Bea meets a boy, Beck, from Smith-Latin Boys Academy, who also struggles with OCD, she struggles to develop a normal relationship. Beck’s obsession with cleanliness and working out frequently interrupts their dates, while Bea’s anxiety is triggered by sharp objects and by driving.

Haydu says that her subject material is often personal—she suffered from anxiety, she says—but that she takes a personal issue and magnifies it for her stories. She hopes, she says, that treating teens’ challenges openly might help lessen the stigma and break the shame cycle that is so common with mental illness. “You have this struggle, and then you experience shame [because of the struggle]. To interrupt that cycle is a huge thing.”

Halperin says that working closely with graduates who were involved in theatre as Nobles students has been an inspiring part of the OCD process. Graduates E.B. Bartels ’06 and Michael Polebaum ‘08, who both work at Nobles, have joined the crew as props manager and house manager, respectively.

Halperin explained that Haydu shared edits of the script with him over 18 months, resulting in seven or eight versions.  He explains that the actors have also helped shape the script. “OCD hadn’t been actor tested or design tested,” he said, noting that premieres come with challenges and opportunities.

The novel version of OCD A Love Story earned strong reviews from Publishers Weekly and Kirkus. Halperin hopes that the stage adaptation will likewise get traction. “I really want this work to have a future.”

Haydu agrees. “So many plays that are done in high schools have students playing 50-year-olds. In this play, the characters are relatable to the actors and to other students.”

Haydu, Halperin, the OCD cast and a Nobles counselor will be available for a panel discussion following the Friday and Saturday evening performances.

Performances of OCD Love Story will be held October 28-30 at 6:30 p.m., and October 31 at 2 p.m. in Vinik Theatre. The show contains some mature content and language.