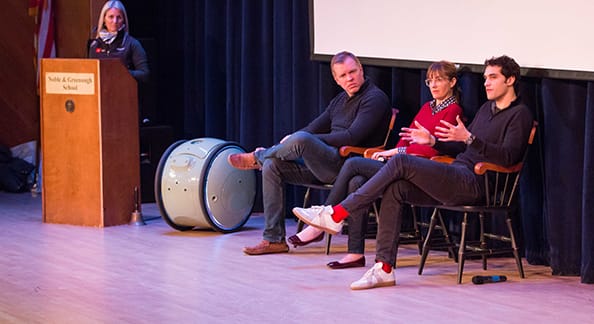 What does it take to be an entrepreneur?

“Most entrepreneurs didn’t set out to become entrepreneurs,” said Jodi Goldstein P’17 ’19, director of the Harvard Innovation Lab, at long assembly on April 6. “They just saw a problem that needed to be solved.” Goldstein likened innovation to a Venn diagram—where impact, need and passion overlap.

In Lawrence Auditorium, Goldstein introduced the Nobles community to three innovators, whose ideas were cultivated at the Harvard Innovation Lab: Beth Altringer, of Piaggio Fast Forward (PFF), Michael Schrader, of Vaxess Technologies, and Will Ahmed of Whoop.

Altringer’s start-up incubated at the Harvard Innovation Lab and is owned by Piaggo, the Italian company perhaps best known for the Vespa scooter. Altringer is chief of design research, and she explained to students and faculty that PFF’s product development is human-centric—designed to make life better for people. The product in development getting the most press is Gita, a cargo-robot that will follow you (and can retrace its path once learned). The potential users include city-dwellers, the elderly, college students and others.

In addition to Altringer’s work with PFF, she is faculty at both Harvard's John A. Paulson School of Engineering and Applied Sciences and the Graduate School of Design, and affiliated with the Berkman Klein Center for Internet & Society. She earned a doctorate is organizational behavior in part, she said, because she thinks it’s important for scientists, engineers and idea people to be able to navigate the politics of major decisions that impact society.  Altinger said that PFF envisions a world where drones own the skies, self-driving cars own the roads and robots like Gita share the sidewalks with humans.

In 2012, Vaxess Technologies, getting its start in the Harvard Innovation Labs, was named Harvard President’s Challenge First Prize Winner. In March 2017, the company led by Schrader and his co-founders earned a $6 million grant from the Gates Foundation. According to the Vaxess website, the company is “committed to developing the next generation of vaccines, immunotherapies and diagnostics that lead to better patient outcomes and are more easily distributed around the world.” In layman’s terms, Schrader explained to the Nobles community: “We are working on new and novel ways to ship vaccines…We want to get better vaccines to more people.” The biggest challenge, he explained, has been the need to transport vaccines across the world while steadily maintaining a temperature of 2-8 degrees Celsius.

Schrader, who grew up in Indiana and attended Purdue, started his career as a mechanical engineer, designing windshields, windshield wipers and rear-view mirrors for cars. No one ever bought a car for those particular features, he joked. Later, he worked at Google, an environment that he appreciated but that still didn’t make him feel needed. “I wanted the opportunity to make a great impact,” he said. While earning an MBA from the Harvard Business School, Schrader met his co-founders, all of whom had become fascinated by the key structural component of silk, a protein called fibroin, from natural fibers. This component is allowing them to stabilize vaccines that would otherwise require vigilant refrigeration and monitoring. When the product comes to market in several years, its worldwide public health impact could be profound.

“Athletes are very focused on what happens during performances,” he said, explaining that the gap is in understanding recovery and its physiological relationship to attaining peak performance. “We’re doing a deep dive on the physiology,” he said.

Whoop has sought to understand the relationship between strain and recovery; its wearable devices, which can be worn constantly and even charged during wear, collect a broad range of data that elite athletes and their coaches can use to inform training programs and other strategic competitive decisions.

Ahmed played squash at Harvard and said he often over-trained in an effort to optimize his performance. Whoop, the product line born of his frustration, is a tool for elite athletes (and, now, consumers) to find balance and, according to its website, “unlock human performance.”

The assembly talks and subsequent discussion in Lawrence were part of the Innovation Series at Nobles, a collaboration between Goldstein and Steve Ginsberg, chief financial and operating officer, and faculty member Scott Wilson, who teach an entrepreneurship class at Nobles and introduced the series in 2014.