iPads in the Classroom 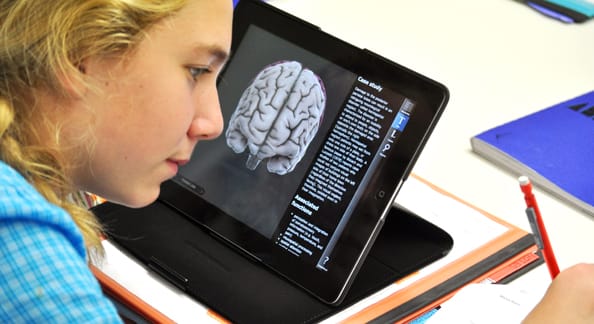 iPads have become an increasingly popular learning tool for schools around the nation, and now the trendy device has also made it into the Nobles classrooms. In the beginning of the 2012–13 school year, the Middle School launched an iPad pilot program for Class VI students and Upper School continued the program for Class IV, which began during the 2011–12 school year. Every student in Class IV and VI now has an iPad for classroom and home use.

The user-friendly, multifunctional touch interface, with an array of educational apps, supports an interactive learning experience. Class VI adapted the device for science, geography and English via Latin (EVL) classes.

In science class, students are using the 3D Brain app to study the brain curriculum. The app provides an interactive structure of the brain and by using the touch screen students can rotate and zoom into different regions. Students may also research further into each section, read case studies on brain development/damage and quiz themselves on the different parts.

For EVL, teacher Meghan Glenn used iBook Author to create a textbook, which is now being used in her classroom. A few other faculty members, including Spanish teacher Violet Richard, are exploring iBooks; Richard has created a multidimensional iBook for her Spanish II class. In addition to regular textbook content, the Spanish II iBook includes hyperlinks to online activities and study review, photos, videos clips.

The Class IV pilot program began with 47 students in the History of the Human Community (HHC) class. Students used the device for note-taking, research, building study guides and sharing files. In a sense, it is the textbook, the folder, the notebook and the computer for this course,” says Jenny Carlson-Pietraszek, history teacher.

The success of the program has influenced its use in math and English classes in the Upper School. Math teacher Doug Guy uses Doceri, an interactive white board application that allows students to complete math problems using the iPad and project their work onto the board. The app can help mitigate the anxiety of solving math problems in front of the class. English classes use the app to build vocabulary.

The device also plays a role in Nobles’ green initiative. Using the iPad to takes notes, complete assignment, build flash cards for studying and share syllabi, handouts and other files, the use of paper is greatly eliminated. Faculty members are also correcting assignments electronically and re-sharing it through a program called Dropbox rather than through email.

Nobles’ approach to iPad use and adoption of other technological tools focuses on how tools enhance learning—in what ways they serve a clear pedagogical purpose.

“The technology is going to eventually allow us to expand on a curriculum and allow kids to have experiences in ways they would not be able to without this device,” says Alycia Scott-Hiser, Middle School academic technology advocate. “There are all these pieces that everyone who is connected to the project is exploring, learning and sharing. We’re all learning a lot as we go.”