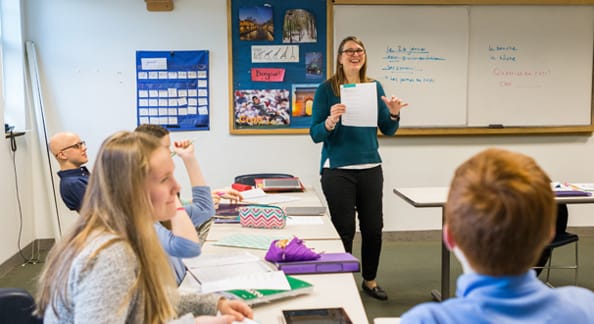 “My goal is to make them love French,” Jody McQuillan says as she begins her French A class for sixies. The introductory middle school French class combines language learning with study skill practice, building students’ confidence not just in French, but throughout their academic lives.

McQuillan, who earned her Ph.D. in French from Brown University, is in her tenth year of teaching at Nobles. Like all modern language teachers here, she focuses on building communicative competence, the ability to speak a second language conversationally. McQuillan explains, “It’s great if the kids can fill out a worksheet, but that’s not going to help them much if they’re in the middle of Paris.”

McQuillan has taught French to pre-kindergarten through college students, but says, for the middle school, there is a special “joy and a fascination to watching students learn the French language .” She explains the “épiphanie” her students experience when they realize that many French words are just like their English counterparts, but different. “It helps them appreciate difference, across content areas.”

The middle school students learn French through a variety of games (“they don’t even realize they’re learning French,” McQuillan says) and through their ePortfolios, a language learning tool that McQuillan and Nobles Spanish teacher Laura Yamartino are in their second year of piloting.

The ePortfolio, defined as “a collection of digital evidence created and curated by a student,” enables students to track their language study progress through their years at Nobles. French A and Spanish A students regularly record themselves speaking their target language, write scripts for their recordings and then write reflections in English about their accomplishments and goals. The teacher then includes her own remarks on each ePortfolio page.

“They can look back on these when they’re older and see how far they’ve come,” McQuillan explains. The ePortfolios provide continuity through years of language study, enabling communication from one teacher to the next. They also encourage self-assessment and provide another study tool for new language learners.

Eventually, the French A students may go on to French B and through the upper school French courses, and maybe up to McQuillan’s honor’s class where they will read Molière and analyze World War II French propaganda posters.

However, they first need that love of the language to set them on that academic path. Using games like a fast, French version of “Heads, Shoulders, Knees and Toes” and online tools like the ePortfolio, McQuillan’s class teaches students the fun of learning French. As one student exclaims in her French language skit, “J'adore la classe de français!”