Jeff Jacoby Speaks on the Election 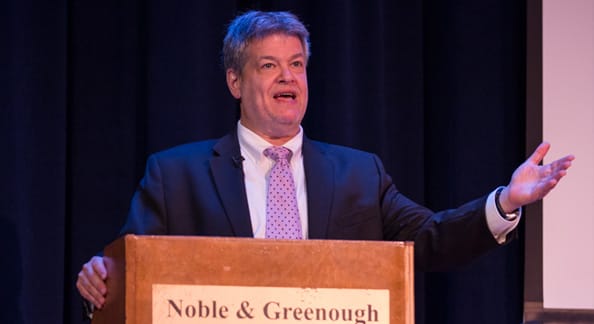 Jacoby began his career at the Boston Globe in 1994 and has since won the Breindel Prize for excellence in opinion journalism and the Thomas Paine Award of the Institute for Justice for working toward the “preservation and championing of individual liberty.”

He began his talk with a recollection of his first appearance at Nobles’ assembly, just after the 2008 general election. Despite disagreeing with many of President Barack Obama’s policies, Jacoby recalled speaking before the Nobles audience in 2008 about how proud he was of his country for the caliber of both candidates. He remembered the 2008 Economist headline: “America at its best."

“I wish I could start on such a positive note this time,” he said, listing the shortcomings of both Hillary Clinton and Donald Trump. “This has been the ugliest election in my memory.

“This year, I’m not voting because of the issues, public affairs or government policy, although of course all of that matters to me. The heart of what I have to say today is this: This year’s campaign is about character.”

Despite defending America’s two-party system in the past and realizing the greater likelihood of a major party candidate’s election, Jacoby said he will vote for Libertarian Gary Johnson this November. “I’m voting for Johnson because I believe he has a basic level of integrity.”

Jacoby defended his choice with an abundance of historical references, from John Adams' famous letter to his wife as the White House’s first resident to the failed Civility Pledge advocated by Republican Mark DeMoss and Democrat Lanny J. Davis.

He mentioned Abraham Lincoln’s inaugural address, when the new President begged Americans not to be enemies. “He implored in vain.” Although he does not think we are heading toward another civil war, he argues, “Our ability to find common ground is diminishing dangerously.” He looked to the students, “I truly hope your generation will be able to stop this decline.”

Jacoby’s arguments challenged the strongly held opinions of many in the crowd, so he concluded his talk with a quiz for the middle school students on the Latin phrase “audi alteram partem.” Ellen Efstathious ’21 translated for the room: “Hear the other side.”