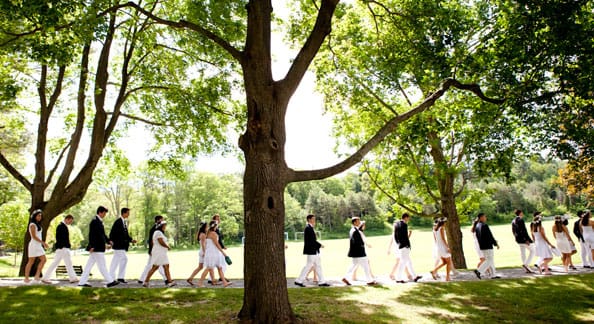 With wisdom garnered from Mark Twain and Shakespeare, a beloved mother, a classic children’s book, and even zombie movies, Noble and Greenough School sent the 117 members of the Class of 2011 out into the world on the blustery morning of June 3, when even the sky wore Nobles blue and white. Honors were announced, teachers were celebrated and diplomas were bestowed on a class characterized more than once as one of the most academically gifted Nobles has ever encountered.

Tommy Kelly ’11, President of the School Life Council, wondered aloud what Mark Twain would have made of Nobles. “What would he have thought of the beauty of the river that our athletes row on and our biology students research with preservation in mind? And what about our magnificent Castle…? Would he have enjoyed watching the national pastime of baseball on our ‘field of dreams,’ the very field we graduate on today? Would he be delighted watching his brilliant tales be adapted for the Vinik stage? And what would he think of our travels? From New Orleans to South Africa, Nobles has allowed us all to become global citizens.”

Head of School Robert P. Henderson, Jr. ’76 reminded the class that the relationships forged at Nobles will carry them into the future.

“If I asked the members of this senior class to think of the five people outside of their immediate family who had truly made a difference for the better in their lives, I am willing to bet that list includes at least one teacher, and maybe more, for nearly every one of them,” he said. “And I surmise that those teachers made an impact because they helped them to see the world in a different way, because they helped them to see themselves in a new light.”

Faculty speaker Alex Gallagher ’90, elected by the class to share his thoughts, reiterated the theme of human connection as he spoke of his mother’s consistent reminder, “Win or lose, your mother loves you.”

“Accomplishing all that you have accomplished required tremendous risk-taking on your part, but you were able to take those risks because of the remarkable love and devotion bestowed upon all of you by the adults in your life that love you,” he said. “That is, in my opinion, what makes this institution great. We build beautiful buildings, we have a fantastic college list, and we can compete with anyone in the arts, athletics and service. But at the end of the day, this school has never forgotten that it is people that make a school special.”

Peter took his theme from the children’s book, The Little Engine That Could. “If we’re all really honest with ourselves, we’d realize it is only in times of discomfort and struggle that we learn the most about ourselves and become better students, or athletes, or friends or human beings,” he said. “Seek out people who will stay with you through your journey—who won’t laugh at you when you say, ‘I think I can,’ in a seemingly ridiculous situation.”

Roz shared her efforts to make sense of the end of high school. “In my world adults know my name, and everyone is politically correct. I don’t know about you guys, but I’m not really ready for the real world,” she said to laughter. Evoking the imagery of zombie movies, in which karma rules and bad guys get their comeuppance, she asked her classmates to end their moment at Nobles well. “The last impression is the lasting impression, and it is as true in a disaster movie as it is here. We have had the huge responsibility of showing everyone how awesome our class really is by how we go out. When we say goodbye to our teachers and classmates today we have one last chance to leave that impression. Let’s rock it!”

After diplomas were awarded, the graduates walked out to greet and thank the teachers and family members who have cared for them—win or lose—throughout their time at Noble and Greenough School.

Mark Twain’s words, offered by Tommy at the beginning of the festive ceremony, captured the spirit of the day: “So throw off the bowlines. Sail away from the safe harbor. Catch the trade winds in your sails. Explore. Dream. Discover.”