Leaders of the Next Generation 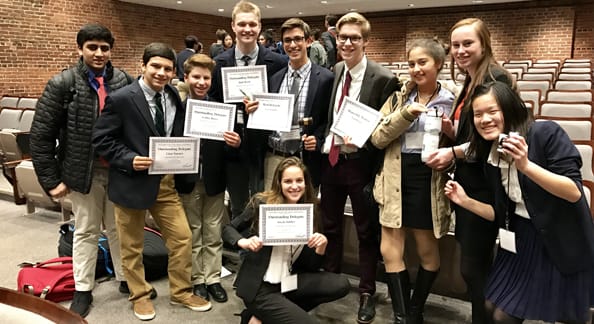 Sarah Jubber ’19, who won Outstanding Delegate in the Russian Council of Ministers Crisis Committee, explains that increased interest in Model UN gave the team leaders the luxury of choice when assembling their delegates. Jubber says, “I think people are starting to take it more seriously and see the value of it.”

Lev Sandler ’19, winner of Best Delegate in the Gazprom Crisis Committee, says of his team, “No one is there just to have something to put on their college applications. They’re actually trying really hard to be successful, which is something special.”

Seasoned Model UN participants created the application process for new team members, and then trained the team to be the most effective negotiators possible. Sandler explains that their faculty advisors, Amadou Seck and Sheila McElwee, guided the students through the process, “but, in terms of actual decision making and forming delegations and working in committees, they’ve given us a lot of freedom.”

Julia Temple ’20, winner of Best Delegate in the Sustainable Development Summit for New Zealand and Best Position paper of the whole conference, found teaching new delegates and watching them perform to be a highlight of the conference. She says, “We really believe that Model UN is training the next generation on how to negotiate, how to compromise, and how to work with other people. Those skills are especially important in government, but also in every career.”

Jubber agrees, “Being able to express yourself in an eloquent way and work with other people are so important now. I think that’s why so many people are drawn to [Model UN and debate clubs].”

The team is looking forward to their biggest event of the year, Harvard Model United Nations, which will be held on Sunday, January 28, 2018.