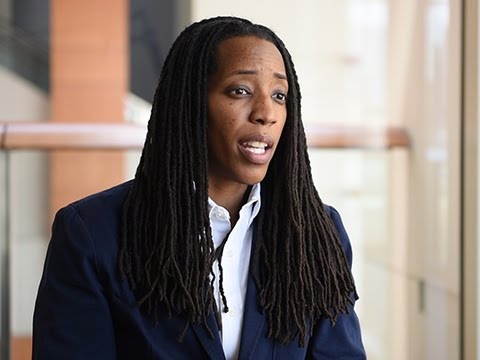 Alejandra Mendez and Marieko Amoah, both ’22, were glued to their Zoom screens this past December when they first heard Bettina L. Love, Ph.D. speak during the Student Diversity Leadership Conference. Moved by her words and ideas, they approached Provost Bill Bussey and said, “We have to have her come to Nobles.” On February 19, 2021, Mendez and Amoah co-hosted Love’s long assembly talk and led the Q&A that followed. Love, an educational researcher and activist,  is the award-winning author of We Want to Do More Than Survive, and the Athletic Association Endowed Professor at the University of Georgia. She describes her work as meeting at the intersection of race, education, abolition and Black joy.

Framing the conversation as addressing the ideas of justice, love and creativity, Love pledged to address “what it means to do this work — even as young people — to do this work of justice and to know who we are.” She first acknowledged the many challenges teens face during the pandemic, and recognized the disproportionate impact of Covid-19 on Black, Indigenous and people of color (BIPOC).

Love said, “To be a Black person in this country is to live in a perpetual state of survival mode, and that is no way to live… Think about what we have fought for as Black people, these very basic rights — to be human, to do what humans do. So this idea is that we want to do more than survive; we deserve to thrive.” She praised brave young people of color like Ruby Bridges and the lesser-known Sylvia Mendez, both young children when they fought for the rights of BIPOC to exist in the same spaces as their white peers. She originally set out to write a book about hip hop, but felt another story was bursting to be told. Her upstate New York roots, the stomping grounds of Frederick Douglass and Harriet Tubman, inspired her. What stood out to her about leaders of the abolitionist movement was “how strategic they were, how thoughtful they were, how brilliant they were — for justice. I wanted to then take that and shift that to the field of teaching.”

Love’s view of abolitionist teaching is applying the boldness and creativity of visionary social movements to the field of education. Decrying the effects of educational redlining, she said, “What we have to understand in this country is that when we don’t educate Black and brown students to their highest potential, we lose as a society. We say to ourselves, ‘Oh that’s terrible for those kids. I feel bad for them.’ No, don’t feel bad for them; feel bad for yourselves.”

Love also warned against reducing historical figures to sound bytes or oversimplifying what they stood for. Citing Dr. Martin Luther King Jr. as an example, Love asked, “Do we even know what his dream was?” before describing King’s push for a “radical redistribution of political economic power.” Teaching the history of those who helped shape it requires telling richer, more complex stories about those individuals. She recalled her own shock in learning about the Holocaust and Japanese internment camps in the U.S. but also pointed out that sadly, “Black oppression has no end date.”  Teaching history as something that happened in the past, Love said, helps us to feel good, “like we conquered something.” She gave the example of compartmentalizing the civil rights movement — “Then we got Obama, boom, we’re done, because it makes us feel good that we can bookend this thing! So I think we have to struggle with the idea that it doesn’t end.”

“Black lives have been seen as disposable in this country… our bodies have never been seen as something of beauty, of joy, of creativity, of love,” Love said. Using the metaphor of the Black Lives Matter as a house on fire, she said, “We not only want water to put it out; we want structural changes, so it never gets set on fire again.” She spoke of including women, Muslims, transgender and queer folks in that movement — ”Blackness at every intersection you can slice, it because you’ve got to know who we are, beyond our pain, beyond our trauma.”

One idea students Mendez and Amoah pressed Love to clarify was differentiating between being an “ally” and a “co-conspirator” for justice. Love described an ally as being more passive and performative (e.g. posting on social media with no action), and a co-conspirator, who takes risks to dismantle injustice and challenge the status quo, recognizing their own unearned privilege and seeking to create change. To broaden one’s view and open oneself to action, Love recommended joining clubs, doing a gap year, and gaining experiences in college. “You can’t stay in your bubble. Get involved… there are no excuses.”

Acknowledging the personal toll activism and being a co-conspirator can take, Love spoke with encouragement, saying, “You all are young. You all have the world to take on. I know it can seem like a lot, but I would say to you, make sure that you do this work with joy, figure out what’s your lane — you can’t do it all. What’s the work you want to leave behind? While voting is important, Love said, it only happens every 2–4 years. Instead, she asks, “What gift do you have? Use it for justice… Think about the March on Washington — there was no Twitter, no Instagram. How’d they get all the people there? Somebody had to run logistics. Everybody has a role to play.”

Mendez and Amoah led with thoughtful, hard-hitting questions in the Q&A that followed Love’s call to action, from supporting underrepresented students, to responding to cancel culture, to racism in the North vs. in the South, and restorative justice.

Love said that to support students, “Recruiting isn’t the key; retaining is the key, showing that you can retain, that you can graduate, and that students can come out feeling well and safe and whole and joyful.” She also talked about dedicating time and resources to mental health, and healing as a form of resistance. “You’ve got to center those things that you love, that bring you joy… sometimes we think those things have to go on the back burner, when actually they’ve got to go at the forefront of your work — protecting your health and your wellness.”

As “cancel culture” becomes more pervasive, Love said, “We have to be okay with this idea of saying, ‘Don’t give me that shabby, raggedy, two-lane apology. Try it again. And we’ll be here when you come back….’ That’s how we bring people back, how we love people — how we say, ‘You’ve done something wrong, we’re going to deal with this as a community — before we cancel you.’ So have we done all of that before we cancel each other? That’s the question we have to be asking.”

Most importantly, during this challenging time when the Covid-19 pandemic and racial tensions exacerbate so many chronic disparities in this country, Love said, “A crisis is not a time to give up; it’s actually a time to double down on the ideas of justice and equity and love and abolition and anti-racism. That is what abolition is about… So don’t feel discouraged because of this crisis. Don’t feel discouraged because of everything that’s going on. We need to understand that this moment right now is the time that we say, ‘Enough is enough!’ and we come out of this crisis stronger, more thoughtful, kinder, more gentle, loving human beings who see our connections… Because even in a pandemic, the idea that your school is dedicating this time for us to dream, and to challenge, and to be critical is a commitment to that after this pandemic is over, we are together.”