Lessons of Our Past

by Noble and Greenough School
Academic, Faculty News May 22, 2017 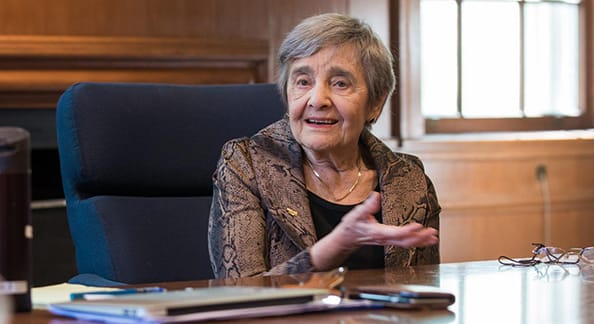 “The more we know, the more we can do to prevent these events,” said Holocaust survivor Dr. Anna Ornstein, on her choice to share her story with Mr. Snyder’s “America and Genocide” class on May 16. Ornstein is a professor of child psychiatry at Harvard University and professor emeritus of child psychology at the University of Cincinnati. Her book, My Mother's Eyes, is a memoir of her experience during the Holocaust. She was invited by Shira Hornstein, Class I. Ornstein’s late husband, Paul, and Hornstein’s grandfather, Steve Hornstein, attended Jewish preschool together in their native Hungary in the 1920s, and reunited after World War II, which is when Ornstein fondly recalls, “the two families became one.”

“One of the big disappointments for us survivors of the Jewish Holocaust is that we have not learned the lessons that we were supposed to have learned, and that is a very painful thing to realize. When the war was over, we were convinced that anyone who lived through those horrendous years would make sure nothing like this would ever happen again. Then we had Bosnia, Cambodia…the Sudan.”

When Ornstein speaks in schools, she says children frequently ask her, “Could this ever happen in the United States?” She tells them, “We’re a multi-ethnic, multi-religious country. This country was founded by people who ran away from tyranny. They wrote everything in the Constitution to protect those rights, and now you read how fragile democracy really is, and it scares you. But it is not impossible.”

Ornstein emphasizes the importance of remembering that every survivor’s story is different depending on their physical and psychological circumstances when tragedy strikes. She first provided some historical, cultural and geographical background about her homeland of Hungary as the context for her own story. She grew up in a Jewish family that was very proud of a heritage built on “great ethical and moral principles.” Ornstein was 17 when the Germans occupied Hungary in 1944. At that age, Ornstein remembers, she “didn’t want to know about the horrors in the world. I understand those who don’t study about the genocide, but I admire you young people who want to learn about it.”

Ornstein was attending a Zionist youth group meeting when the German occupation was announced in March of 1944, and she made the incredibly risky return home to her family. After the occupation, her two brothers were sent to forced labor camps, where they died, while her father, who was too old for forced labor, was put under house arrest.

By June of 1944, Ornstein and the rest of her family were deported to Auschwitz. When she arrived, she knew nothing of its purpose to exterminate her kind. Of her family, only she and her mother survived. She recounted her initial denial of unfathomable horrors like the crematoriums, and Nazi soldiers who would snuff out a human life for the smallest of infractions, or no provocation at all. “There were fewer than a million Jewish people in Hungary before the war—more than half of them were killed in five weeks,” Ornstein said.*

When one student asked, “How do you heal?” Ornstein answered, “You go in with certain strengths that help you survive. My family—journalists, doctors—put things into words. I did not intend to become a psychoanalyst, but it gave me the means to understand.”

"Rather than studying victims or perpetrators, find out who had the courage to take amazing chances with their own lives to save others,” Ornstein suggested, praising those like Protestant pastor and rescuer Hermann Maas who risked death to save Jewish children. “He said he had ‘no choice.’ It is just some strong piece of some people's psyche and their sense of morality,” she said.

Another student asked about forgiveness and responsibility, a difficult theme in the War and Genocide class. Ornstein replied, “There are people who can forgive. I am not one of them. Our survival as a society relies on its justice system. We need a third of the government to be independent, to tell a society like ours, ‘You have to follow these rules to live together.’ I believe in that. Forgiveness, to me, is a religious notion. Courts do not forgive, courts judge. Our justice system is not perfect, far from it. But in Germany, the government became the justice system, the ones to decide. I am not a forgiver. I am for good justice.”

Dr. Ornstein works on behalf of the Terezin Music Foundation to help raise awareness and appreciation of the role of the arts in times of oppression.

*According to the U.S. Holocaust Memorial Museum, ‘Of approximately 825,000 Jews living in Hungary in 1941, about 63,000 died or were killed prior to the German occupation of March 1944. Under German occupation, just over 500,000 died from maltreatment or were murdered. Some 255,000 Jews, less than one-third of those who had lived within enlarged Hungary in March 1944, survived the Holocaust.’