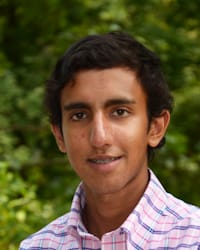 About 70 students take part each month in the 30-minute testing challenge of the New England Mathematics League (NEML). Students who participate receive a score and ranking for the month, as well as a cumulative score for the year.

Akshat Agrawal ’14 is one of 13 students in New England who has a perfect cumulative score, as of February 2014. We caught Agrawal as he headed to take test number six, and asked him a few questions.

What level of math are you in?

I’m taking AP statistics, and I did multivariable calculus in the fall. There’s no calculus on any of the tests. That doesn’t mean they aren’t hard; you can use the pre-calculus stuff and make it really hard. Math is like a pyramid. At the bottom level you can go very, very broad, learn a lot about the basics and then it slowly goes up from there.

Do you take other tests besides the NEML test?

In addition to NEML, I take other, more intensive tests. Earlier today, I took the Massachusetts Association of Mathematics League level II test. I got a qualifying score in November, so today I drove over to Canton to take a three-hour math test.

How often do you practice?

It varies. There was one week in January I think I practiced 25 hours. It ranges from 25-0 hours. I meet with Mr. Kehlenbeck a few times a week to discuss problems.

I see math as a hobby; it’s enjoyable. I spontaneously do it; there’s no set schedule.  I have books at home that have really tough problems that I use to practice. I don’t like chess, but it’s a similar mindset.

Do you have any long-term goals when it comes to math?

I think I’ll major in math and economics because I’d like to go in a mathematical finance direction. A long-term goal for me is to do well in college competitions. If you do well on those you can put it on your resume, and it really helps with the job search. Those tests are for the best math students in the nation.

Do you have advice for students who are interested in math competitions?

Do as many fun problems as possible. And by that I mean, do the hardest problems you can do. Always find harder problems and push yourself. There are so many problems out there that I can’t solve even though they don’t use any calculus. Keep trying. Math is very frustrating. I’ll be stuck on a problem for days and I’ll be in a rut. It happens to everyone, so keep at it.