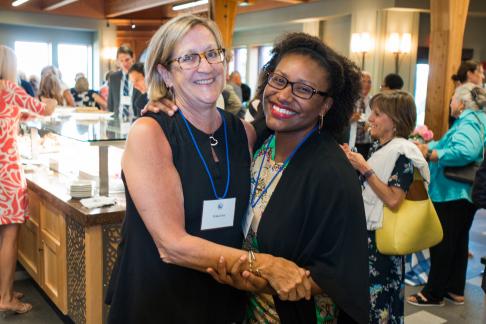 At the annual Members of the Corporation dinner on June 15, 2017, Bob Henderson gave his final public remarks as Nobles’ sixth head of school. President of the Nobles Board of Trustees Beth Reilly ’87 thanked Henderson for his remarkable leadership and updated the audience of the school’s progress over the past year, including the appointment of Dr. Catherine J. Hall as Nobles’ seventh head of school. Reilly also introduced fellow graduate and trustee Mariel Novas ’06, who honored Henderson by reading a letter addressed to him. Read her welcome and the letter below the gallery.

Hi everyone, I hope you are all having a wonderful evening so far. Beth asked me to come up here today and share a few words about Bob Henderson. I spent several days figuring out how to concisely say all that I could say about Bob, and ultimately decided that it made the most sense to write him a letter. So here goes…

I very clearly remember my first week at Nobles as a sixie almost exactly 17 years ago. It was your first week too, but I didn’t know that then. I was twelve years old, incredibly confused, and doubting the choice I had made to leave the safe haven that was my Boston public school to become a student at Nobles. I felt that my skin color, my accent and my non-brand clothes made me stick out like a sore thumb, and yet, I felt pretty invisible at the same time.

I remember the first time I heard you speak at assembly – “Cool!” I said to Alex Nelson, who sat next to me for six years, “So this is our principal?” It took me a while to understand how a head of school was different and to appreciate the unique and all-important role that you played at the school.

A few weeks into the school year, the craziest thing happened (in the mind of 12-year-old me). You stopped me in the hallway and asked me how the year was going so far. I don’t recall every bit of the conversation, but I remember how I felt. “He knows who I am!” I thought to myself. I remember you smiling at me and me smiling back. Nobles started to feel a bit more like home after that.

We didn’t cross paths much until the following year. On September 11th, 2001, the entire eighth grade boarded yellow buses and left for our beginning of year retreat. I sat in the second row right behind the teachers and noticed early on that morning that something was off. Mr. Matlack had his headphones in and was listening to the radio, but he looked pale. He looked shook.

When we arrived at the campsite, our teachers explained what had happened, but the news was so unbelievable that it took half an hour for reality to hit me. My classmates were crying but, back then, I didn’t know what the World Trade Center was. Some of you might know that English is not my first language so I had also never heard the word “hijack” before that day, which added to my confusion.

It all became quite clear when I overheard someone say, “I think we’re going to war.” In that moment, I understood. My older brother had enlisted in the Navy just months before. My brother was going to war.

When we returned to Nobles the next day, I was certain life and school would never be normal again. I had also learned that 9/11 touched the Nobles community quite directly – that classmates of mine had lost family members or knew people who had had close calls the day before. In the midst of that paralyzing fear and uncertainty, you got up on stage in assembly.

Again, I don’t remember what you said but I remember how you made me feel, how you made us ALL feel – safe, loved, part of a family. For a couple of hours, members of our community – sixies, seniors, faculty – got up on stage and shared their feelings, their anxieties, and their hopes. I’ve never forgotten September 12th, 2001 and that is thanks in many ways to you and the community you helped sustain.

Once in the upper school, I saw you a lot more. You always said hi to me; you took a special interest in my interests; and when I walked by your office you would often wave me in. We engaged in conversations that ranged from being quite silly to quite serious. I knew you always had my back (surely more times than I’m even aware of).

When my mentor at school was diagnosed with cancer my junior year, you and Mr. Denning took over the Ethics class she had been teaching. I was pretty distraught. You and Denning became pillars of strength for me that spring. It was that year that I got to know you as the scholar that you are. You pushed me to push, to ask critical questions, and to trust my voice. You opened up new worlds of thought for me. I appreciated the opportunity to know you as more than head of school – I got to know you as a thinker and teacher. Years later, once I became a teacher myself, I often recalled that Ethics class – co-taught by the brilliant minds of Marcela Maldonado, Michael Denning and Bob Henderson. I will always be grateful for that example.

I became a senior prefect my last year here and we grew even closer. I remember countless evenings eating pizza at your house, and countless moments when you pushed the 10 of us to deeply consider our leadership; to not take our power or our voices for granted because, whether we were aware of it or not, our peers looked to us for guidance and to set the tone for our community. Thanks to your instruction, we learned to see ourselves as just that that year – leaders of the school.

We remained in touch through my college years. I came back every summer to work at Upward Bound and one of us would always make sure to find the other and catch up. Because of this relationship, I always felt that Nobles was home, that I was never too far away. And yet, when I got your call a few years ago to join the Board of Trustees, I was stunned by your request. I hung up the phone in disbelief and honestly cried a little. I felt infinitely grateful to be able to give back to this place that had given me so much and had taught me so much.

I am so sincerely grateful for all I have learned as a member of the board – and I’m probably most uniquely thankful for the opportunity to observe your leadership up close. I’ve gotten to see you through the tough decisions and the incredible wins. I’ve seen you lead in moments when leadership was lonely or complicated. And, always, I bore witness to the love, deep respect, and gratitude that so many students, parents, graduates and fellow faculty and staff feel for you. Your legacy here at Nobles is undeniable – there’s no question we’ll be hearing tales about Mr. Henderson for years to come.

As you know, this fall, I am starting a doctoral program in Education Leadership at Harvard. I know with certainty that I will take many lessons from you and your extraordinary leadership here over the past 17 years. Thank you for being an example for me, but above all, for being my mentor and friend.

You finished well. We love you.