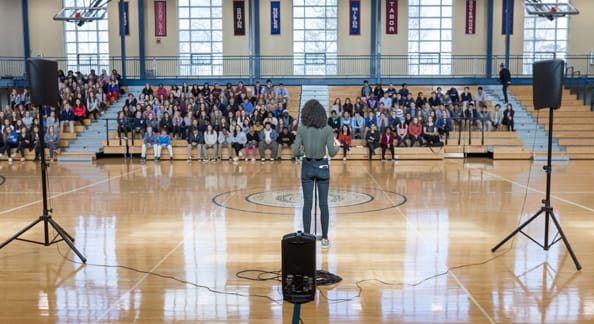 On April 20, students engaged in and reacted to the National School Walkout in the Morrison Athletic Center (MAC) and the glass room of the academic center. According to the mission at nationalschoolwalkout.net, the student-led walkout protested “congressional, state, and local failures to take action to prevent gun violence.”

Students prefaced the walkout and its reaction with assembly speeches explaining why some students chose to participate or not.

Patrick McElroy ‘18 chose not to participate because, although he agrees with the need for rigorous background screening before gun purchases, he believes the goals of the movement have already been accomplished in Massachusetts. He said, “Gun laws are passed by elected officials. When we want certain things to get passed, we have to elect the officials that will pass them.”

Mikaela Martin ’19 explained her reasons for joining the walkout, including solidarity with the people in states that lack strict gun laws and to “dispel any apathy…I’m walking out to show adults that this is not a game.”

At 9:30 a.m. on April 20, students walking out met on the Beach, while other students groups met in Gleason Hall or attended class as usual. As Head of School Catherine Hall explained in an email to parents preceding the day, student organizers chose the time and date to correspond with the 19th anniversary of the Columbine shooting.

Walkout participants processed to the MAC, where they gave speeches, offered pre-voter registration and engaged in conversation about how best to enact change. Noa Fay ’19 explained that, although she supports the second amendment and is herself a trained markswoman, she feels that stricter gun laws are needed to prevent the future loss of lives like Junior R.O.T.C. member and Parkland shooting victim Alaina Petty. Lauren Kelly ’20 said, "We, the people of America, can fix this."

Meanwhile, a group led by the Young Republicans club moved from Gleason hall to the academic center to discuss the walkout and gun laws. John Murray ’19 argued for the need to move background checks from the state to the federal level, so that a person denied the sale of guns in one state cannot go to a different state to be accepted. Ben Shaer ‘21 argued against nationwide legislation, citing the difference between police response time in East Coast cities and Midwestern farmland. Harrison Cohen-Harding ’19 argued that the safety of citizens supersedes the need for AR-15s, while another participant mentioned the far greater number of victims in shootings involving pistols than so-called assault weapons and asked how far was too far when limiting the second amendment.

Participation in the walkout and other gatherings was student-led. Classes continued on a regular schedule throughout the student-led conversations.