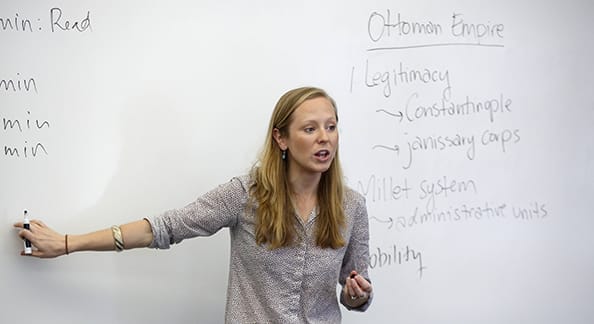 The idea of the course came to me through the lessons I developed in my AP Euro classes last year. I often wanted to stop and dwell on how the idea of "eastern" cultures influenced the self-identification of Europe as "western," "Enlightened," "civilized," etc. I think this plays an enormous role in the development of the idea of "European-ness," but with the more rigid AP curriculum, I had almost no time to delve into it with my students. To be honest, I first thought of the name of the class, "East Meets West," as a potentially interesting course, and then the curriculum was born from that single concept.

We will start very big, looking at geography of the regions, to understand the labels we tend to associate with certain areas. Where does Europe start and end? Where is the Middle East? How is it different from the Near East? The Far East?

We will then begin to look at certain noteworthy theoretical works that will help frame our discussions and understand what has already been said about some of these major topics: Edward Said's Orientalism, Samuel Huntington's Clash of Civilizations, Benedict Anderson's Imagined Communities, etc.

We will then start to move chronologically, and somewhat thematically, throughout history. Ancient Rome and Greece as the "cradle of western civilization", the Crusades, the encroachment of the Ottoman Empire into Europe (a HUGE moment in European history!), finally into modern European history, like the Enlightenment and the growth of nationalism in eastern Europe and the Middle East, and then into contemporary topics such as the European Union, Islamophobia in Europe and the U.S., etc. I want students to read a lot of primary sources, including literature, so that they themselves can analyze and develop theories as to how Europeans perceived "Easterners", and how this influenced the development of European identity.

I think the most interesting and fun part of teaching is watching your students question their own convictions and self-perceptions through seemingly dry historical material. I myself became interested in this topic because of my own, almost emotional, reaction to realizing how these broad ideas (otherness, nationalism, etc,) influenced my view of the world.

In the end, this course is about empathy. I am not trying to teach my students that the "West" is an evil force that has done everything wrong and nothing right. What this is really about is recognizing how history has brought us to the present and shaped our beliefs about the world and of ourselves. In the post-9/11 United States, it is essential for us to understand how our relationship with the Middle East has evolved over time. The media generally portrays one-sided narratives about Muslims as born-terrorists with a bloodthirsty streak. It is not far off from Crusade-era rhetoric! The complex relationship between "east" and "west" is centuries deep and, I believe, truly does inform our contemporary outlook.

Over the last 10-15 years, with the rise of Jon Stewart and Stephen Colbert and the young adult media cycle, more people have come to rely on such satirists as credible news sources. Satire and Humor studies the techniques they use and why those are persuasive.

As English instructors, many texts we assign have weighty, disheartening themes..suicide, death, murder. While serious themes can certainly motivate effective satire, I wanted students to understand that reading literature can also elicit laughter.

Satire is an especially useful medium for adolescents with strong convictions to express their ideas. Many of them will go on to colleges with satirical publications, and my hope is that they will be able to contribute.

We’ll start with Jonathan Swift’s "A Modest Proposal" and George Orwell’s 1984. Students will also compare cross-cultural humor like that in the British version of “The Office” and Oscar Wilde’s The Importance of Being Earnest with that of American writers. During a unit about using satire to highlight gender inequalities, we’ll read Margaret Atwood’s The Handmaid’s Tale and excerpts from Tina Fey and Amy Poehler. Kurt Vonnegut’s  Slaughterhouse-Five will help us examine how satire is used to write about war.

Students taking this course will have lots of opportunities to create their own satire, through creative writing and a strong multimedia component. Senior electives let them take the lead, and I’m excited to see what they come up with.

The Vietnam War dramatically altered the role of the U.S. in the world, transformed American politics and culture and directly impacted our country’s decisions to go to war in Afghanistan and Iraq. This course was originally started by Bill Mayher about 25 years ago, but I’ve taught a version of it for about half that time. I changed it to pressure myself to try new things; now it has an increased focus on Iraq and Afghanistan, taking lessons that, in theory, we should be learning from and applying to more modern situations.

The curriculum is interdisciplinary; we’ll look at war through film, fiction, memoirs and music. History is too often seen as a series of names, dates and facts. War is a deeply personal thing that affects people in very dramatic ways. The decisions to go to war, fight or find an ally are incredibly complex. I’ll help students to wrestle with the complexity; the idea of no right answer can be difficult for them.

In this course, after examining the parallels between the wars in Vietnam, Iraq and Afghanistan, every student will conduct an interview with someone whose life has been directly impacted by war. They’ll look for a broad array of interview subjects: those who fought, civilians, refugees. One lesson I want them to take away is that war happens to real people; it’s not just a shoot-’em-up movie.

They’ll think about these conflicts from other points of view and a range of opinions—from a South- or North Vietnamese civilian or soldier, or American veteran, to a conscientious objector.

Over the years, I’ve taken Nobles kids to Cambodia and Vietnam who have taken his class and have the context. (I started the trip in 2003.) With EXCEL (Nobles’ Experiential & Community-Engaged Learning Program), I want to tie more academic components into some aspects of the travel; it makes the experience so much richer.

At the end of the course, I’ll ask the class, “Do you know what I think about the war?” My goal is for them not to know…and to wrestle with the most important aspects of war.