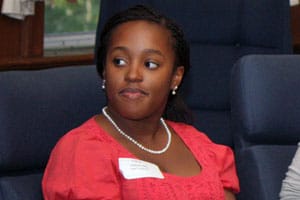 While most of us tried to soak up the last moments of summer vacation, a small group of Nobles veterans—Head of School Bob Henderson ’76, Dean of Students Erika Guy, Dean of Faculty Maura Sullivan, Head of Upper School Ben Snyder and Chair of Science Department David Strasburger—joined more than a dozen new faculty and staff members on campus for the annual New Faculty and Staff Orientation. The two-day meeting in late August gave the newest members of the community the chance to explore campus, receive schedules and information packets, and start the process of learning “all things Nobles.”

After dispensing some invaluable advice (i.e. “Read everything” and “Go unafraid to ask for help along the way”), Henderson explained to new faculty and staff members that it will take time to adjust to the fast pace, schedule and school culture. “One of the most important things for you to do is to discover the culture of this place,” he said. “You’ll hear a lot of people talk about the incredible fast pace at Nobles, but you need to feel it and experience it for yourselves. It's a good thing; it's because there is such high energy here.”

This year’s group of new faculty and staff includes both familiar faces (several graduates) and those completely new to the Boston area. They bring their talents and knowledge, in addition to a passion for education and working with young people. Learn more about the newest members of the Nobles community—check out the New Faculty and Staff Bios:

Ashley Bradley—English Department, English Teaching Fellow
Although a native Philadelphian, Ashley has seen neither Rocky nor It’s Always Sunny in Philadelphia and, as a vegetarian, does not eat cheesesteaks. Despite these seeming disqualifiers, Ashley is a proud Philadelphian and an even prouder Phillies “Phan,” who remains somewhat intimidated about moving into Red Sox territory. After attending The Hill School, a boarding school outside of Philadelphia, she returned to the city, where she earned her Bachelor’s from the University of Pennsylvania. Dedicated to education, she spent more semester hours working as a teaching fellow at Freire Charter School than she did in her college classrooms.

Devareaux Brown ’97—ISS, System Administrator
Devareaux is a Nobles graduate, Class of ’97. After graduation, he went to Williams College where he earned a degree in English. After college, Devareaux started working at medical software company Meditech and spent the last 10 years there. While in college Devareaux played football for four years and really loved the sport. He got involved in coaching over the past few years and this fall is excited to return to the Nobles community as an ISS staff member and a part of the football staff.

John Chung—Math Department, Math Teacher
John received his introduction to Nobles through his work with the Achieve program this summer. While he can confidently point out the directions to the swimming pool or any of the Purell dispensers in the Middle School, he still has quite a bit of acclimating to do before he is fully familiar with Nobles. The biggest shift for John will be the transition from working in a boarding school to working at Nobles. He taught math for the past three years at the Loomis Chaffee School in Windsor, Conn., in addition to serving as a dorm faculty member. During this time, he discovered a love for being in the classroom and coaching soccer and track. Before working at Loomis, John attended Colby College where he double majored in Physics and Mathematical Sciences.

Alison Crevi—Classics Department, Classics Teaching Fellow
Alison recently graduated from Colby College with a Bachelor's in Classics and a minor in Anthropology. She enjoyed volunteering as a mentor with Colby Cares About Kids and coaching a Waterville youth girls’ soccer team. She played squash for four years and captained the team her senior year. Her favorite pastime is traveling. She has traveled widely in Europe, including taking part in an Etruscan archeological dig, and has visited Africa twice. This summer she expanded her adventures to include South America, trekking to Machu Picchu and through the Colca Canyon.

Andrea Berberian Gardos ’01—Communications Fellow
Andrea grew up in Wellesley, the youngest of five children. In 2001, she graduated from Nobles following in the footsteps of her sister Vanessa ’95 and brother Greg ’99. Andrea studied art history and studio art at Williams College, where she played squash and golf. After graduating in 2005, Andrea worked at a production company in Cambridge as an editor, creating museum exhibits and educational media tools. She then moved to Los Angeles for a year and was fortunate enough to experience working on a large budget Hollywood film, a television pilot, and toy commercials at a small production house. She’s excited to be back at Nobles and part of this great community again.

Meghan Glenn—Classics Department, Classics Teacher
Meghan has a passion for Latin and all things Roman. She has traveled far in the years since her graduation from Bryn Mawr and subsequent graduation from the UMASS Latin and Classical Humanities Program. She has taught Latin students from the sixth grade to the university level. Meghan has attended numerous foreign language immersion programs in Latin, Spanish, Italian, and French. She has also traveled extensively around the world—to Honduras, Spain, Mexico, Canada, Australia, Italy, Greece, and Ireland. She has gone to Rome, Ostia, and Pompeii three times with different eighth grade classes.

Peter Hamilton—Development and Graduate Affairs Office, Major Gifts Officer
After graduating from Gettysburg College in 1998 with a B.A. in English, Peter taught middle school English, math, civics, and Latin at Dexter School in Brookline. During his time at Dexter, he earned an M.A. in Literature from Middlebury College's Breadloaf School of English and studied in Alaska, Vermont, and Oxford, England. Prior to arriving at Nobles, Peter served as the Dean of Students for Dexter's upper school and coached the varsity baseball team. In the fall of 2010, Peter joined the Nobles community as the assistant boys' varsity soccer coach and served as a dorm parent in Wiggins Hall. In January he accepted a full-time position in the Development and Graduate Affairs Office as a Major Gifts Officer.

Courtney Monahan ’07—Classics Department, Teaching Fellow
Courtney graduated from Nobles in 2007 before going on to receive her A.B. in Classical Languages from Bryn Mawr College. She studied both Latin and Greek and minored in Classical and Near Eastern Archaeology. A semester at the Intercollegiate Center for Classical Studies in Rome allowed her to complement her classes with first-hand experience, climb Trajan’s Column, and eat some delicious food. Back at Bryn Mawr, she tutored her fellow students in Latin and sang in the Haverford-Bryn Mawr Chorale while serving as president of the Bryn Mawr Fencing Team. She has spent the last two summers working at the Steppingstone Foundation, preparing students for the challenges of independent schools like Nobles.

Rob Murray—Athletic Department, Assistant Athletic Director
Rob joins the Nobles Athletic Department as the Assistant Athletic Director and will help coach varsity football coach and baseball. After graduating from Weston High School, Rob attended Ithaca College where he received a B.S. in Physical Education Teaching. He was a varsity baseball starter for three years and captain during his senior year, helping the team to earn two trips to the Division III College World Series. After college, he played two seasons of professional baseball in the Independent Leagues before a late season knee injury cut short Rob’s baseball hopes. He focused on a career change, and for the past 13 years, Rob has been a police officer.

Alexi Paraschos—Music Department, Music Teaching Fellow
Alexi is very excited to be joining the Nobles community. A local singer/songwriter and native of the Boston area, Alexi attended Tufts University where he was active with the Tufts Third Day Gospel Choir, S-Factor a cappella group, and Harvard University Kuumba Singers. Through these groups, he learned a great deal and had amazing performance opportunities. After a community service year in Chapel Hill, North Carolina, he spent last year working at Fenway High School and assistant directing the Boston College Gospel Choir, “Voices of Imani.” He’s excited to continue with them, and starting with “Imani” at Nobles.

Jonathan Rees—Science Department, Chemistry Teaching Fellow
Jon graduated from Hamilton College in 2006, where he received his Bachelor’s in Biology and minored in Mathematics. Following graduation, Jon worked as an investment banking analyst but decided in 2009 to alter course and become a dentist. After traveling throughout Europe, Jon began to fulfill his pre-med requirements at the Tufts University Post Baccalaureate Premedical Program, which concluded in June 2011. Jon’s interest in teaching comes from his experiences working with kids at Camp Tohkomeupog, a sports and outdoor wilderness adventure camp in Madison, N.H.

Irina Troconis—Modern Language Department, Spanish Teaching Fellow
Irina was born in Mérida, Venezuela, and moved to Quito, Ecuador, when she was 13 years old. In Quito, Irina became fluent in English and French, and started developing a passion for literature, dance and theater. After obtaining her IB Diploma she moved, once again, to Amherst College, where she saw snow for the first time in her life. Irina’s passion for literature and dancing have grown in thanks to her experience tutoring students in French and Spanish, researching for literature professors, and performing and teaching salsa and other dances to her friends and during certain school events.

Rachel Weinstock—Business Office, Assistant Controller
Rachel brings more than 10 years of experience in higher education from the Franklin W. Olin College of Engineering and Hebrew College. Prior to that, she worked in healthcare administration and public accounting. She is a Certified Public Accountant and graduated from Temple University in Philadelphia. Rachel and her husband Jeffrey Solomon live in Needham with their two girls, Jackie (18) and Tali (16) She is active in her community—the parent organizations at her girls’ high schools; her temple; Circle of Hope, and various Needham committees and Town Meeting.

Laura Yamartino —Modern Languages Department, Spanish Teacher
Laura graduated in 2009 from the University of Notre Dame, where she double majored in History and Spanish Language and Literature. While at Notre Dame, Laura was involved with community service, served on her dorm’s Hall Council, and participated on the university’s sailing team and an intramural lacrosse team. She also spent a semester studying in Toledo, Spain, where she discovered her obsession with tapas and Spanish art. Following college graduation, she moved to Valencia, Spain for a year where she worked as an English Teaching Assistant on a Fulbright grant. This summer she earned her Master’s in Education with a focus on Secondary Spanish from Boston College.