On to the Next Stage 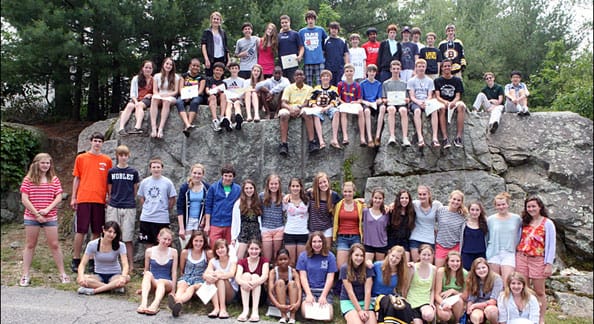 Just minutes after taking their last final exams as Middle Schoolers, members of the Class of 2015 celebrated the end of their Middle School careers as they “Stepped Up” to the Upper School. On Thursday, June 2, Class V students and their guests—who collectively had outgrown the Morrison Forum, the event’s traditional venue—filled the Vinik Theatre with joy and excitement. And although students took center stage rather than sitting on the forum floor, Middle School Head of School John Gifford ’86 reiterated “the Step-Up ceremony is not a graduation,” and is still meant to be informal and casual.

Gifford told the story of a young cellist who had lost his sense of “play” as his passion waned after many nights of rehearsal and long tours. Soon the “ 'little boy' was gone from his face.” Gifford urged Class V students to continue to work hard while still having fun. And as school gets tough and occasionally tedious, he urged students to “not lose the 'little boy' and the 'little girl' from your face.” He added, “I’d like to suggest that one key to contentment is the combination of hard work on a cause you care deeply about coupled with playfulness and curiosity.”

Student speakers Jessie Harthun and Dana Grey, elected by their peers to represent the class, thanked their classmates and the faculty for their companionship and profound support. “It’s not every day when you come upon a group of kids that will do almost anything to support each other,” Jessie said. “We work hard together and play hard together.”

Dana, who wished he had more time to speak about every teacher in the Middle School, said, “In large part, due to the dedication of our teachers, our class has become a well-oiled machine.” He didn’t forget to thank Assistant to the Middle School Maryanne MacDonald for her immense “backstage work.”

Entertainment was provided by the Middle School a cappella group who performed Don’t Stop Believing by Journey and Joey Wu who treated audience members to a violin solo.