Our Mission in Action 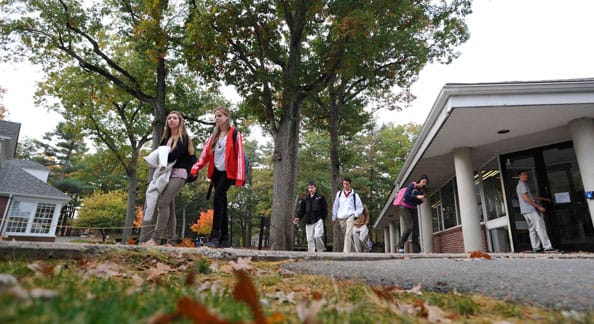 The evolution of the Mission statement began with Head Eliot Putnam in 1969, when Nobles was all-male and the Mission called for “imparting knowledge, stimulating intellectual curiosity and presenting [the] opportunity to serve…” During Ted Gleason’s headship, the 1979 Mission compared Nobles to a “family where one may develop the mind, the body and the spirit for a life of service.”

In 1999, under Head Dick Baker, a year before Henderson’s arrival, the Mission stressed academic rigor and diversity along with “caring relationships between faculty and students.” The revised Mission, approved by the Board of Trustees in March 2009, shows an evident thread binding the four modern mission statements.

In his insightful analysis of the more four missions, Henderson said: “The historian in me loves to theorize as to why the wording in each era was chosen, and what it says about the general and local school culture at each juncture. I’m also aware that each of these statements represents a negotiation and a compromise among interests and perspectives in the school community at the time, with various groups and individuals seeking to leave an imprint. So what were the threads that were bound together in the creation of our most recent iteration?

“…We sought to create something that spoke about the unique heart of Noble and Greenough School…A Mission statement is not some sort of marketing tag line or an advertising slogan. However, it is an opportunity to create distinction for Nobles in a geographic region with a huge amount of choice for consumers in terms of fine independent schools.

“Another essential challenge was to create a statement that would be readily identifiable to graduates… The two notions that seemed to resonate most powerfully…are a commitment to a life of service and the emphasis on …the idea of relationships as fundamental to all good teaching and coaching, greater than all other pedagogical styles and innovations.

“The notion of a life of service…means an unselfish commitment to support, learn from, care about, and commit to the betterment of all those with whom we work, live and interact, in a both local and global sense…”

Further, Nobles students consistently identify three things that are really important at Nobles. “The first is that they value deeply their relationships with the faculty. The second is that Nobles has very high expectations for them in terms of both intellect and character, and they appreciate this. And the third is that the sense of community here is quite real and powerful, and an important part of their lives. All of these sentiments we sought to include in the Mission.

“[Another] key goal was to reduce the Mission to a format and expression that was much more memorable [than past missions]… And even if people struggle to recall the precise wording of the new statement, they will recall the key phrases, especially “leadership for the public good” and “mentoring relationships.”