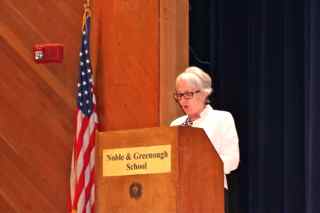 In Lawrence Auditorium on Oct. 1, clinical psychologist, parent educator and author Wendy Mogel spoke to parents and faculty about the philosophy behind her book The Blessing of a B-. Educator and New York Times writer Jessica Lahey spoke to students on Oct. 2.

Mogel's advice, which draws heavily from Jewish teachings, asserts that modern parenting styles undermine the success and happiness of the same children that parents desperately want to help. They are trying too hard, she said, exhausting themselves and stilting the growth of their kids.

Mogel shared a conversation with a parent who was exasperated that her daughter refused to go to law camp. “Law camp?” Model said. “Our parents [fro a generation or two ago] barely knew what grade we were in.

“We’ve all gone cuckoo,” she said. The media presents our times as fraught with imminent disaster, and the contemporary parental impulse is to control the only thing we think we can: our children.

“We want them to go from being Little Buddy to Junior Statesman,” she said. She quoted a conversation with a teenager who lamented, “’Our parents want us to be good problem-solvers—but they don’t want us to have any problems.’

“We are not allowing them to develop at their normal, raggedy pace,” Mogel said. She also suggested that treating them as though their special talent—whatever that might be—exempts them from ordinary tasks such as loading the dishwasher is silly and, ultimately, counterproductive.

Lahey’s Oct. 2 talk with students centered on the idea that intrinsic motivation—not extrinsic—will lead to greater competence in all realms. Using Shakespeare’s Henry IV as a parable, she explained that the king’s expectation that his son, Hal, would succeed him was problematic.  Hal could only become a good king if he chose the role himself.

Lahey gave examples of extrinsic motivation such as rewards ($10 per an A, for example). She cited several studies in which members of groups who were required to perform a task performed more conscientiously, creatively and successfully when no reward was attached to their performance.

Lahey acknowledged the work of Carol Dweck, author and professor of psychology at Stanford University. Dweck’s book, Mindset, emphasizes the importance of effort and what she calls a growth mindset. Dweck also asserts that praise for inherent talent can induce a debilitating fear of failure.

Lahey told students that the elements needed for extrinsic motivations are autonomy, competence (not just confidence) and feelings of connection with other people.

Should students’ parents continue to praise them for talent and to reward them for tasks completed, she said, students should understand that the behavior comes from love—and they should seek their own motivation.

“When you get praise from your parents, I want you to think about hearing it differently,” she said.

On Oct. 4, both Mogel and Lahey are scheduled to appear on the Today Show to talk about parenting.