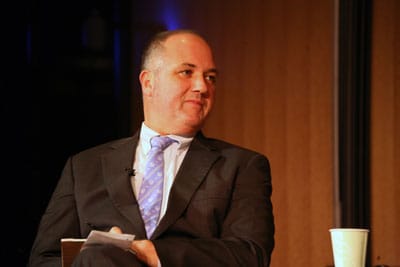 New England Cable News reporters Allison King and Peter Howe ’82, WBUR political analyst Todd Domke, and Carmen Fields, a longtime figure in the Boston journalism community, shared perspectives on why President Obama won, how the Republicans failed to win voter support, and what they think the citizenry should be thinking about now.

Howe moderated, first posing the question of why Republican candidate Mitt Romney lost. King, who was at Romney headquarters on election night, suggested three primary factors: the perception of Romney’s commitment to issues related to women; his perspective on immigration; and the power of incumbency.

Domke concurred: “Politics are cruel,” he said, adding that Romney had not put forth a big, bold agenda. Blacks, Hispanics and Asians were “turned off, insulted” by Romney. Romney was offering “’Mad Men’ in an age of ‘Modern Family.’”

Fields suggested that the election “affirmed the notion of shared responsibility… let’s build it together rather than go build it yourself.” She also urged politicians to “sit down and reason together” as President Reagan and Tip O’Neill were known to do.

“After an election,” said Howe, “there is far more attention on why the loser lost rather than on why the winner won.”

The experts also speculated on weaknesses of the Republican “brand”; whether uneducated voters should vote or stay home; who is to blame for the dismal economy; and the role of social media (read: Romney’s 47 percent comment) in the age of Smartphones and social media.

Domke lamented that the citizenry demands little in the way of meaningful public discourse. “Both campaigns,” he said, “were poll-driven, and neither campaign made an effort to educate [the people] on the issues. The campaigns focused on gaffes and scandal.

There is a degeneration of debate,” he said, referring as contrast to the substance of the Lincoln-Douglas debates. “[We focus on] the silly, the absurd, the superficial.”

King added that Obama should not assume that re-election means the whole country has his back. “He needs to reach across the aisle,” she said. She also encouraged the audience of students and faculty to consume a mix of media—from The Boston Globe to the Wall Street Journal to FOX News to Rush Limbaugh. “Do yourself that favor. It will give you greater understanding.”