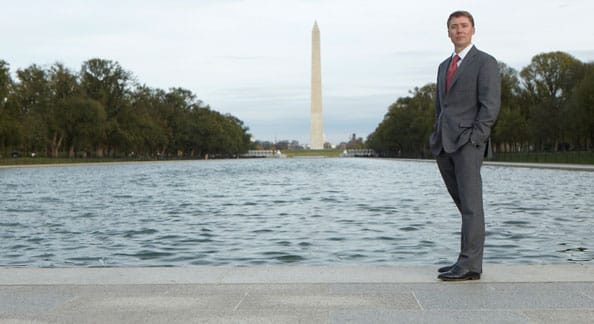 Nobles is proud to have graduates serving this country in myriad ways. We have active servicemen and women in each branch of the military, countless veterans, as well as graduates who work as civil servants, officers and U.S. government agents. Some chose this line of work because they always felt a duty to serve in this way; others ended up here after life experiences fueled their passions to help others. Regardless of how they arrived—we are all thankful for their dedication to our great country. Here is one of many stories of graduates who choose to serve others day in and day out.

John Robinson ’93 wanted adventure. After graduating from Connecticut College in 1997, it’s exactly what he went looking for. He traveled the world, met new people and picked up interesting jobs along the way—working on a commercial fishing boat in Alaska; living and working among monks at a Russian Orthodox monastery on a tiny island off of the Kodiak; and traveling through South and Southeast Asia, including the Philippines, Vietnam, Thailand, Laos, India and Nepal.

Through it all, Robinson got that taste for adventure—and adversity.

After more than a year he returned to the East Coast, deciding it was time to get what he describes as a “real job.” Following a year in the finance industry, Robinson still yearned for excitement. “Traveling was amazing,” he says. “But I wanted something more authentic, more rigorous.”  He entered Officer Candidate School and received a commission in the United States Navy in May of 2000.

His first assignment was on the Greek island of Crete, where he lived in a small village outside of Hania. “The village was the best part. I helped my neighbors with their sheep, drank beer in the café with the old men, harvested olives and learned to make wine and raki,” he says.

Then September 11th happened. Robinson finished his tour in Greece, and was assigned to an airwing onboard the aircraft carrier USS CONSTELLATION (CV-64). His ship was in the Persian Gulf in March 2003 when the Iraq war began and took part in combat operations throughout the conventional phase of hostilities.

After four years of active duty, which included time in Europe, the Pacific, and the Middle East, Robinson was ready for a break from military life. When his service obligation was up in 2004, he left active duty.

He took a job at the MIT Sloan School of Management, working with Nobles graduate Ken Morse ’64 at the Martin Trust Center for MIT Entrepreneurship (formerly the MIT Entrepreneurship Center). As a project manager, Robinson found himself traveling again, spending time in the Middle East to support MIT’s burgeoning relationship with the UAE’s Higher Colleges of Technology.

In 2008, he re-joined the Navy. Robinson missed both the culture and foreign affairs. He studied at the U.S. Naval War College, where he was able to combine his experience in the military with his interest in global energy. That led to his current job with the U.S. government.

During the week, Robinson, who lives in Alexandria, Va., with his wife, Elizabeth Delaney ’02, commutes to his Washington, D.C. office, where he analyzes trade dependencies and the flow of imports and exports, paying particular attention to energy. “The most interesting part of my job is watching how energy and trade influence international relations.”

Robinson says there are several things he learned at Nobles that help him balance his civilian career with his role in the Navy Reserves, where he serves as a Lieutenant Commander. “Nobles taught me self-discipline, time management and accountability,” he says. Robinson also points out that his time training with math teacher and wrestling coach Steve Toubman helped prepare him for the physical demands of the Navy.

In the Reserves, Robinson spends several weeks a year working with groups at the Naval War College and is drawn to the academic side of his service. “I’ve always been interested in history, and I’m drawn to the culture and traditions of the Navy. I think my operational experience is behind me, but I see myself working on the academic side of the service for years to come,” he says.

Robinson was mobilized for eight months and deployed to Afghanistan, beginning in November 2011. While he says it was one of the most difficult assignments he has faced, he is grateful for the insight it provided. “It helped me understand the conflict better,” says Robinson. “So often conflict defines a generation, and since 9/11 these wars have certainly changed the way I experience the world. I’m glad I had the opportunity to participate, to see it for myself, but I’m also looking forward to the next chapter.”