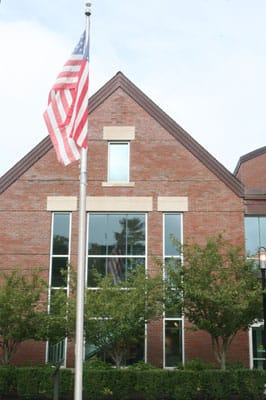 Storytelling connects and binds us together as a community. On Friday, September 9 during the annual September 11 Remembrance Assembly, Spanish faculty member Meg Jacobs courageously shared her story with the Nobles community in honor of her brother Jon Randall, who died during the attacks on 9/11.

Randall, who was 42 years old at the time, worked on the 95th floor in north tower of the World Trade Center—the first tower hit. Ten years later, Jacobs and her family grieve, but have chosen to celebrate and honor Randall’s life. She said, “You can fill your heart with anger and vengeance, but a heart filled that way is too heavy to live with.” She spoke of her brother as a man with “peace in his heart” and someone who lived “thoughtfully” and “humbly and gently through his faith.” Randall has a daughter Katie, who is a senior in college today. Jacobs said, “We see his presence embodied in his daughter and in her bright future.”

Head of School Bob Henderson ’76 pointed out that although some students in the room were too young to remember what occurred on that day, those who are older remember it vividly. He shared the distinct memory of September 11, 2001. “We all recall exactly where we were and what we were doing at the moment we heard the news.” And the next day, the school learned of the direct loss to the Nobles community. Each year the school remembers and honors the lives lost: Richard Ross, father of Franklin of the Class of 2002, Cora Hidalgo Holland, mother of Nate of the Class of 2001 and Jessica of the Class of 1997, Sonia Puopolo, mother of Mark of the Class of 1990, and Jon Randall.

In honor of Cora Hidalgo Holland, who was a dedicated supporter of the Nobles community, an award is given annually to a dedicated staff member in Holland’s name. Henderson presented this year’s award during Assembly to Terri Agostini, accounts payable coordinator in the Business office. He describes Agostini as someone who “represents the school with integrity and pride” and who is welcoming, supportive, and “never seen without a smile.”

Please click below to listen to members of the community remember 9/11/2001. Audio clips were produced by The Nobleman staff.