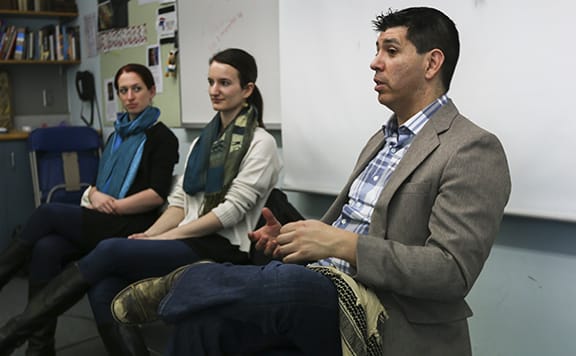 “Here at Nobles,” Kevin Chen ’20 began in last Friday’s assembly, “we are urged to take risks and test limits. Roman Baca does both.”

Then, with energy and humor, US Marine Iraq War veteran and ballet dancer Roman Baca took the stage to describe his unique perspective and the mission of his dance company Exit12.

As Baca told the Nobles community, he returned home from his tour of duty in Iraq to a battle against his own lingering aggression. Lisa Fitzgerald, his long-term girlfriend at the time, asked him what he wanted to do to manage it. “I want to start a dance company,” Baca decided.

Since starting Exit12 Dance Company in 2007, Baca and his company have helped those affected by war, both in America and back in Iraq, use dance and other forms of expression to move through trauma.

Following Baca’s instructions, students choreographed interpretive dances of their own names then taught their dances to each other. As Baca later explained, “We do this exercise with veterans because working with their names helps them reestablish their identities and be creative. Then, teaching their routines helps them collaborate and reminds them that they are not alone.”

While the students danced, Baca encouraged the less-assertive students to try out leadership roles and challenged the groups by changing their positions and the music tempos. Baca also challenged the audience to change their default field of vision when watching the performance.

Baca then led the middle school English Via Latin course in their discussion of Sophocles’ Philoctetes. During the discussion, Baca guided the students to help them recognize moral ambiguity in the text.

Responding to Odysseus’ conflicting obligations to both his faraway countrymen and to Philoctetes as an individual, the students worked to find a meaningful definition of “honor.” Baca used their difficulty as a lesson in empathy for those affected by war.

“Every marine wants to be honorable,” Baca explained, “But honor is a fluid concept. As a marine, sometimes I was mean and aggressive. Philoctetes helps veterans see that their experiences today connect all the way back to 409 BCE. Through this story, veterans learn that they are not alone.”

At the end of his busy day, Baca described his efforts to reach cultural diplomacy. “The strength of what we do involves connecting cultures and encouraging empathy,” he said.

Classics teacher Dan Matlack expressed excitement that Baca and EXCEL share a common goal to reach the rest of the world. As Baca said, “Nobles has a strong awareness of a worldwide culture.”