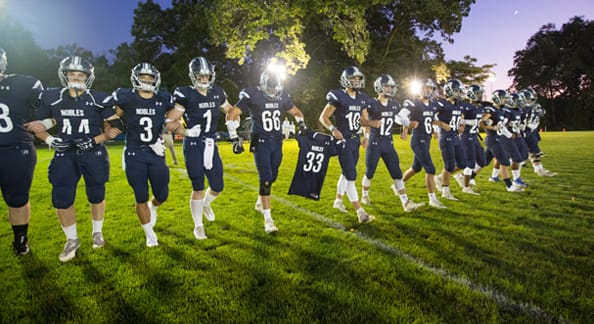 On Saturday September 23, girls varsity soccer and varsity football played their first home games under the lights. The buildings and grounds department lit up both Greene and Burr fields for the event, which featured the Zinnekin's Waffle Truck, food sales by the parent's association to benfit Achieve and music by DJ Michael Freeman '18.

Before the football game, parents, fans and students lined the sidelines while both the Nobles and Rivers teams gathered at midfield for the national anthem sung by John Castillo of the Massachusetts Association for the Blind and a brief ceremony to honor McCrae Williams '17, who passed away two weeks ago. Williams played varsity football at Nobles and his older brother is a Rivers graduate.