The Science of Stereotyping 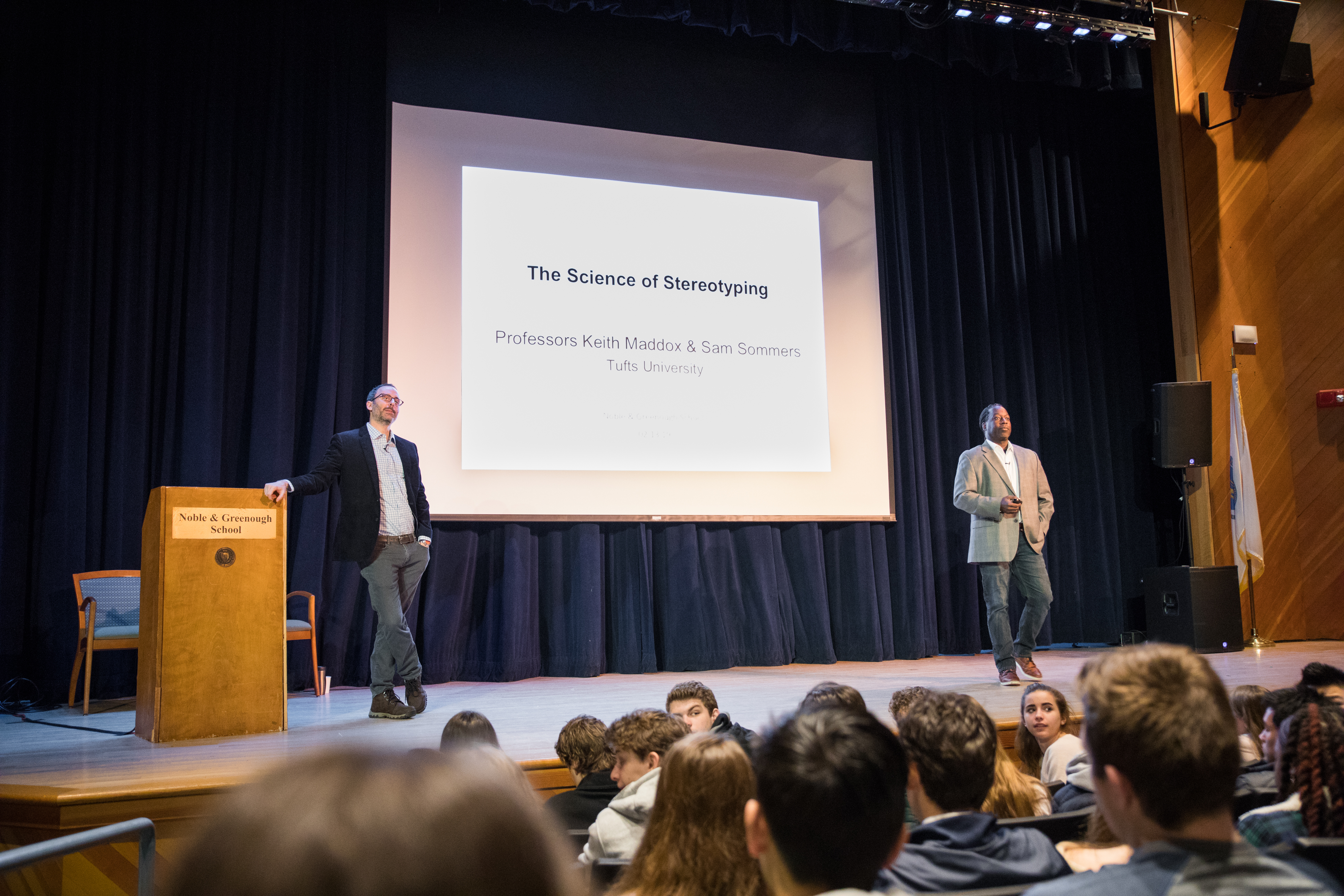 To be human is to be biased. But what can we do about it? On Wednesday, February 13, Tufts psychology professors and social scientists Sam Sommers and Keith Maddox spoke to the Nobles community about the universal tendency to stereotype and harbor implicit biases, and how we can learn not to let those attitudes adversely affect our decisions and interactions with others.

Leading the whole assembly audience through a series of word-association tasks, Sommers and Maddox demonstrated how society has conditioned all of us to associate negative and positive connotations with different concepts of race, however unconscious these biases may be. One exercise had participants read through a list of names, and tap their left knee for any names that sounded stereotypically “black,” or their right knee for names that sounded more stereotypically “white.” The same exercise was repeated with words that sounded pleasant or unpleasant (e.g. “peace” vs. “cancer”). Then “black-sounding” and “white-sounding” names were mixed within a list, and people were asked to tap left for “black-sounding” and right for “white-sounding.”

Maddox and Sommers acknowledged that this result is uncomfortable for us to face. Why is it so hard to create positive associations with black-sounding names? One student asked if the order of the tasks influenced the results, as it seemed that associating “good with white” and “bad with black” first in the sequence of exercises then made it harder to reverse those associations. But data from 80 million study participants who have taken implicit associations tests in randomized sequences have shown negligible differences in outcome, Maddox and Sommers said. They want people to understand:

Maddox explained why stereotypes are so pervasive. “Even people we wouldn’t necessarily characterize as racist or sexist or homophobic can still have these kinds of associations that unintentionally, for the most part, influence the kinds of judgments they make or the interactions they have with members of those groups.” But it’s not about “bad apples,” Maddox says. “The research suggests that we all have the tendency to be a little bit bad.”

Maddox explained that for all the information that bombards us, we have to come up with shortcuts to decide how to interact with objects or people. Categorization by physical characteristics is one of those shortcuts. The dissonance occurs because as humans, how we process information about the world conflicts with our ideas about how we should perceive people.

Describing a 1963 cognitive psychology study from Tajfel and Wilkes, Maddox demonstrated that categories can alter our perceptions so we think things that belong to the same group are more similar to one another than they actually are, and things that belong to different groups are more different than they actually are. Likewise for groups of people.

The danger lies in the inaccuracies we create when we oversimplify our world perception by categorizing. “Stereotypes reinforce themselves in many ways as we look to confirm our hypotheses instead of seeing the information that would lead us to think a little differently. They can influence what we see, believe, remember, how we act toward others, or even behave,” Maddox said. “Our world views have been shaped by discriminatory behavior towards people who belong to certain groups, which leads to unequal outcomes, which are then represented in a wide variety of the information we get about the world, from the media to our real-world encounters.”

Sommers addressed the important implications of bias in the classroom, citing a study in which teachers of a few randomly-selected first graders were told they had been given a prestigious academic assessment and were “late bloomers” poised for bright intellectual futures. Those children showed an IQ gain in one year of 27 points (the average gain is 12). The high expectations of those teachers made a marked impact on the academic growth of those children. The self-fulfilling prophecy, Sommers said, is real. Our expectations can and do change others’ behavior.

Knowing about our biases, Maddox and Sommers said, means we can do something about it.

“Addressing bias isn’t necessarily about changing individual hearts and minds, but changing our behavior so it influences environments,” Maddox said.