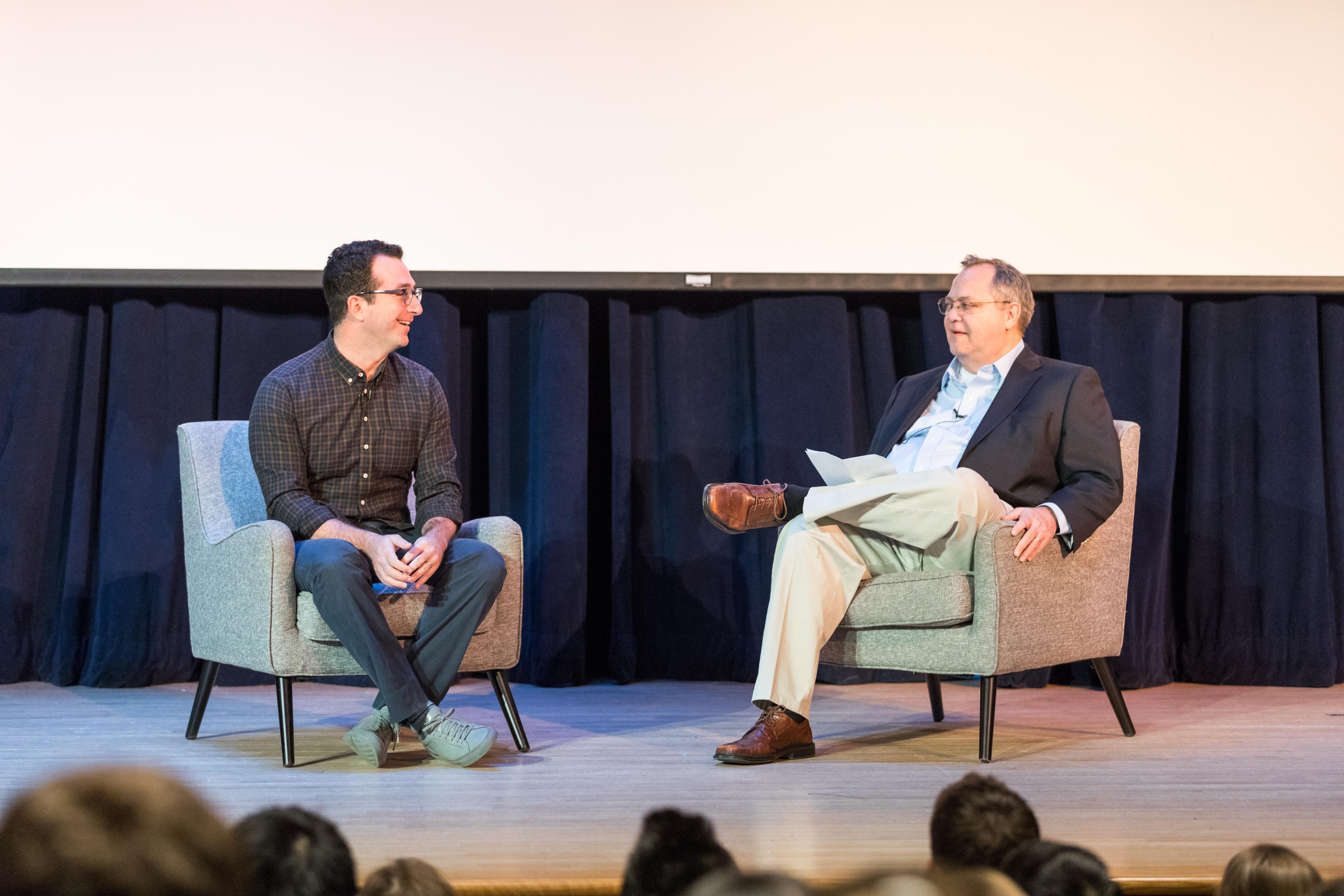 “I’ve always been inspired by the people around me,” shared Jeff Raider ’99, co-founder of both Warby Parker and Harry’s. “And Nobles is a really inspiring place to be.”

After engaging in a Graduates Council speaker series event the night before, Raider joined Provost Bill Bussey on the assembly stage on January 30 for a conversation about Raider’s beginnings and his path to success. Bussey began with a nod to the senior section of the audience, “In 1999, you’re up there, eating M&Ms. Now you’re here. How’d you do it?”

Raider listed influential Nobles teachers: Ben Snyder, Nick Nickerson, Vicky Seelen, John Gifford, Mark Sheeran and Alden Mauck. “One of the things I learned at Nobles was how to learn,” he reflected. He remembered his first few classes here, when he thought he had to answer every question the teacher asked. With his characteristic charm, Mauck had suggested that Raider may want to answer fewer questions, with a bit more thought.

After Nobles, Raider earned his bachelor’s and master’s degrees from Johns Hopkins University. He began his career with a brief stint in the political sphere, then at Bain & Company and Charlesbank Capital Partners. When he realized he wanted to be an entrepreneur, he began studies for his Master of Business Administration at the Wharton School.

The online eyewear company Warby Parker began with a simple question, posed by one of his Wharton School friends: “Hey, what do you think about selling glasses online?” Soon Raider and three of his friends were dedicating all their efforts to making a business out of the idea. In March of their second year at the Wharton School, the four friends launched Warby Parker to immediate success. Raider remembers his friend monitoring the sales from the back of the room, ticking them off by the second: “another order, another order, another order.”

Raider eventually stepped back to streamline the leadership of the new company, but soon got a phone call from his friend Andy Katz-Mayfield. Katz-Mayfield had an idea similar to the one that started Warby Parker: razors are overpriced, farcically difficult to purchase, and smothered with inappropriate gender stereotypes. How could they do it better?

Fast forward and Harry’s is now a billion dollar company. They recently launched a women’s line, Flamingo, that breaks the trend set by other major companies of low quality razors emblazoned with a hefty “pink tax” and hyper-feminized marketing.

“We always wanted Warby Parker and now Harry’s to be forces for good,” Raider explains. For every pair of glasses purchased at Warby Parker, another pair is given to someone who would not otherwise be able to afford them. Harry’s and Flamingo combat gender stereotypes with donations to like-minded charitable organizations and thoughtful product decisions. As he explains it, “the mission is built into the business model.”

Bussey’s conversations with Raider revealed the entrepreneur to have a rare mix of both ingenuity and humility. In Bussey’s words: “You turned out alright.”