by Noble and Greenough School
Assembly, Graduates May 30, 2018 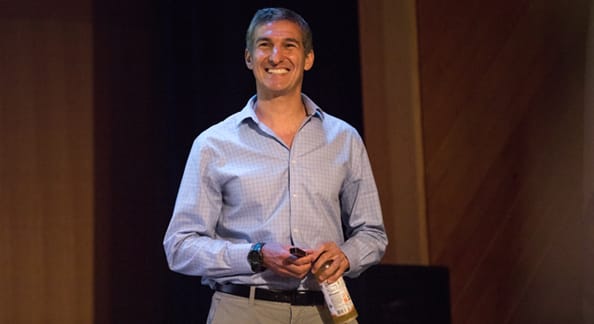 In fall 2012, Seth Goldman ‘83, co-founder of Honest Tea, accepted the Distinguished Graduate Award in Lawrence Auditorium. Today, he returned to speak to students in assembly and visit a class on innovation taught by Steve Ginsberg and Scott Wilson.

In assembly, Goldman told students and faculty that his big idea for Honest Tea came after a run in New York City when he was thirsty but didn’t want water or a super-sugary drink. With support from his Yale professor Barry Nalebuff, Goldman was inspired to brew small batches of lightly sweetened tea in his home kitchen. Shortly after, his local Whole Foods ordered 15,000 bottles.

Goldman started the company in 1998 and, with a growing consumer emphasis on sustainable diets, it thrived. When the Coca-Cola Company acquired Honest Tea in 2011, it became the first organic and fair-trade brand to become part of the world’s largest beverage-distribution system.

Twenty years after its inception, Honest Tea maintains its commitment to organic, fair-trade products. It also reinvests in the communities and countries, where its sources products, giving back more than $500,000 last year. “This is about more than [a product with] better taste. It’s about long-term investment,” he said.

He told students that he’d always wanted to have a positive impact on others and had thought a role in government would allow him to do that. At Nobles, he served as School Life Council president and, at Harvard, studied government. Later, he realized that socially conscious businesses can also effect change. “Business can have a very positive impact in the world,” he said.

Goldman’s recent venture, Beyond Meat, is a plant-based burger alternative that has received coverage in Forbes, O (The Oprah Magazine), the Daily Mail, the Wall Street Journal and elsewhere. Goldman is a vegetarian. With animal and environmental welfare as key priorities, Beyond Meat is not just another veggie burger. With pea protein as a lead ingredient, it “looks, cooks and tastes” like a traditional burger, according to beyondmeat.com. Burgers from Beyond Meat can now be found in the meat section of more than 650 stores nationwide, including many Whole Foods locations in Massachusetts.

Goldman’s success is remarkable yet Goldman he said that his success was dependent on the chance to take risks, fail and learn resilience. He cited his Nobles wrestling career with coach Steve Toubman, which resulted in a string of losses and one win (actually, a forfeit) in his first year.

“If you’re not getting the chance to fail, you’re not stretching yourself,” he said. He also suggested that students begin to build their own brand, suggesting that the way they conduct themselves and the values they practice every day have long-term meaning and impact. “The brand you build is your most important asset,” he said.

“Don’t forget the kind of privilege you have here.”