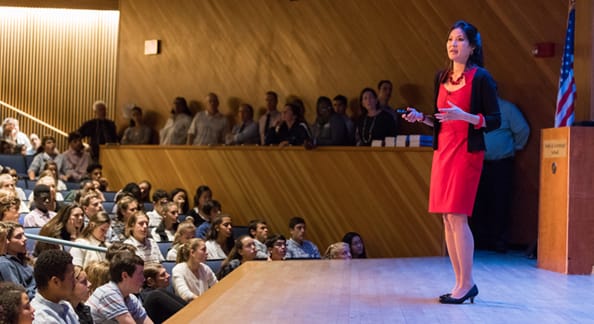 On October 25, Sheryl WuDunn spoke at morning assembly in Lawrence Auditorium. She is a Pulitzer Prize winner and co-author of four best-selling books. Paul Apostolicas ’18, whose mother is WuDunn’s first cousin, introduced WuDunn to the Nobles community, highlighting her broad accomplishments and dedication to helping girls and women throughout the world.

While at the New York Times, WuDunn and her husband Nicholas Kristof won the Pulitzer Prize for International Reporting in 1990 for their coverage of the Tiananmen Square protests of 1989. When the pair reported on a young Chinese girl, Dai Manju, whose parents could not pay her rural school’s $13-a-year tuition, the reporters’ work began to evolve. The story prompted many Times readers to send $13-checks, while one significant donation began to change the girl’s whole school and community.

WuDunn told students and faculty that the Dai Manju’s life was transformed. She finished school, got a job and helped support her family and improve their living conditions. “What we had was a natural experiment with girls’ education,” she said. WuDunn and Kristof have supported causes for women and girls ever since, focusing particularly on the power of education to effect major social and economic growth.

The education of girls has the power to lift their whole communities, WuDunn said. “It is a path for social change.”

With her husband, WuDunn co-authored four best-sellers, including Half the Sky: Turning Oppression into Opportunity for Women Worldwide, and A Path Appears: Transforming Lives, Creating Opportunity—yet WuDunn, who had initially planned to be a doctor, said she had no idea that her career would unfold as it did.

At Nobles, WuDunn shared statistics on worldwide poverty, which has decreased overall, and about health: Child mortality rates have decreased and vaccination rates have sharply increased. “In some ways, we are doing remarkably well,” she said. But she acknowledged that some might say we are in a moment of international crisis by many other measures. But, she suggested, with danger or crisis can also come opportunity.

“The biggest success will come about when we solve the biggest challenge—gender inequality.

“One of the best ways to fight poverty and terrorism is to educate women. They can become a stabilizing force.”

WuDunn has been a commentator on numerous television and radio programs. In addition to her work as a writer and speaker, she is a senior banker focused on emerging markets and technology.