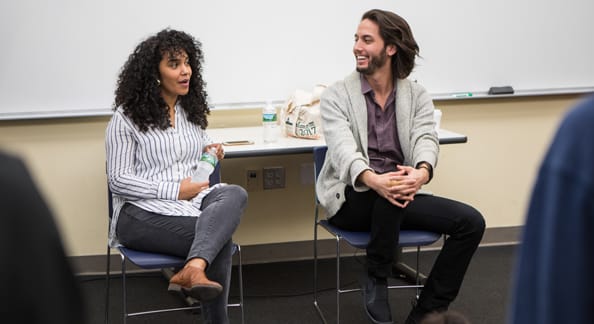 After growing up in a vibrant Dominican family of storytellers in New York City, spoken word champion Elizabeth Acevedo felt stifled by her graduate writing program. “I was trying to write myself into existence, to create the stories I wanted to read, to put girls of color at the forefront of these beautiful adventures instead of relegated to the sidelines. I wanted to be the main character in somebody’s narrative—ultimately, it was my own.”

When Acevedo and fellow spoken word artist and Project VOICE co-founder Phil Kaye visited Nobles on October 18, they shared some of those personal narratives in assembly. Kaye was raised in California by a Japanese mother and Jewish-American father. He fell in love with spoken word at the Student Diversity Leadership Conference he attended while in high school, where he saw art and identity collide.

Project VOICE (Vocal Outreach Into Creative Expression) uses poetry to promote empowerment, improve literacy and encourage empathy and creative collaboration in classrooms and communities. Both Acevedo and Kaye have created careers of their love for spoken word, and have enjoyed numerous awards and worldwide acclaim, from Lincoln Center to TED Talks and as sensations on YouTube.

The artists’ visit was made possible by the Fund for Asian Studies and the Diversity Fund. History faculty member Nahyon Lee (who taught Kaye in California) and Japanese teacher Tomoko Graham fostered the relationship, hoping to promote dialogue about identity on campus. In addition to performing for the middle and upper school, Kaye and Acevedo joined a discussion co-hosted by the Asian Culture Club and Jewish Culture Club, and led two English classes, where they shared their backstories, inspirations and creative processes.

In Charles Danhof and Julia Russell’s English II classes, Acevedo and Kaye challenged students to list “Three Things I Know to Be True” and to expand on them as a prelude to performing. Students learned various prompts to generate ideas, and how to enrich their writing with sensory details.

Kaye encouraged students, saying, “I used to play a lot of basketball. I was terrible when I started, but a lot of it is about showing up and trying. I thought writing was waiting for the ideas to come as I sat with my laptop in an artsy café, but it’s not an all-or-nothing model when it comes to creativity.” He urged students not to be obsessed with perfection, which only exacerbates one’s fear.

From the page to the stage, Acevedo and Kaye embrace the theatrical aspects of expressing their poetry and channeling it using their bodies and their voices. “Performances can change each time with the energy of different audiences. Stage fright comes from the idea you are alone and people are waiting for you to mess up, when in reality, they want you to succeed. Focus on that positive energy,” says Kaye.

Acevedo thanked workshop students “for trying something new and being brave. Keep finding opportunities to say what you feel out loud; it’s transformational.” Ultimately, Acevedo and Kaye showed the next generation of writers that everyone has something valuable to say.

Lee says, “Spoken word is such a powerful way to hear stories. Artists like Phil and Liz make themselves open and vulnerable, which leads to a better understanding and empathy…It’s hard taking those risks and trying to carve out your own path…It can be hard but if our students can find and do something they love, they’re lucky. Find the things that renew your souls.”