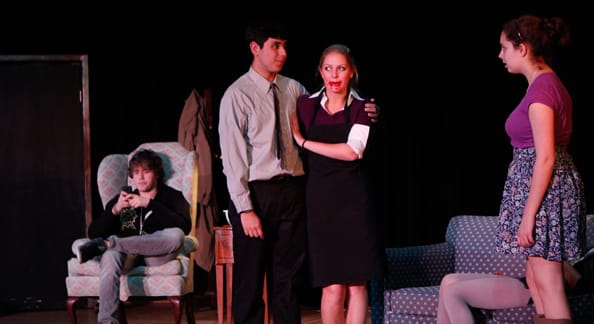 What does it take to direct a full production?

Class I students Shanti Gonzales and Greg Swartz found out during the annual student-directed plays Jan. 31 and Feb. 1. From script selection to casting to team-building, among other responsibilities, Nobles student directors apply what they’ve learned in their theatre prerequisites to the semester-long project.

In selecting stories that incorporated a bit of love, drama and a lot of humor, Gonzales and Swartz tackled productions that would not only be exciting to direct and also entertain the audience. Shipwrecked! by Donald Margulies, directed by Gonzales, tells a story about a man’s 30-year adventure lost at sea and his life on a deserted island. Swartz’s Vamp Ire by Bradley Hayward is a twisted tale about a girl who brings her vampire boyfriend home to meet her parents. “For a student-directed play, I think it’s about making it a very enjoyable, fun experience to watch,” says Swartz.

Early team building was the secret to a successful cast for both Gonzales and Swartz. Their teams varied in grade levels and acting experiences, so improvisational activities and character-building games formed the teams’ chemistry early on. “I had to lay down a foundation before I could even dream of beginning,” said Gonzales. “But they picked it up really fast and I’m glad we had that foundation [to begin with].

Gonzales and Swartz explored many aspects of theatre, including Acting I and Acting II and an acting/directing workshop, before applying for the positions of student directors. They have also been involved in mainstage plays on stage and behind the scenes. Now, as mentors to their own casts, Gonzales says, “being a director has changed me as an actor. Being a director changes the way you see production.”

“It [being a director] is about how to communicate your ideas successfully and work together to be a part of a production that is greater than yourself,” says Swartz. “As a director, you’re left to make a lot of final decisions. It’s great to have Mr. Halperin [advisor and director of theatre] there; someone you know you can turn to and to check in with and ask, ‘Is this the right call here?’ ”

“Learning to be a director has taught me confidence,” add Gonzales. “I was pretty scared, but Mr. Halperin basically told me, ‘Your instincts are good. You got it. You just have to believe in yourself.’ That’s something I will take with me not just in the theatre world but in life in general.”