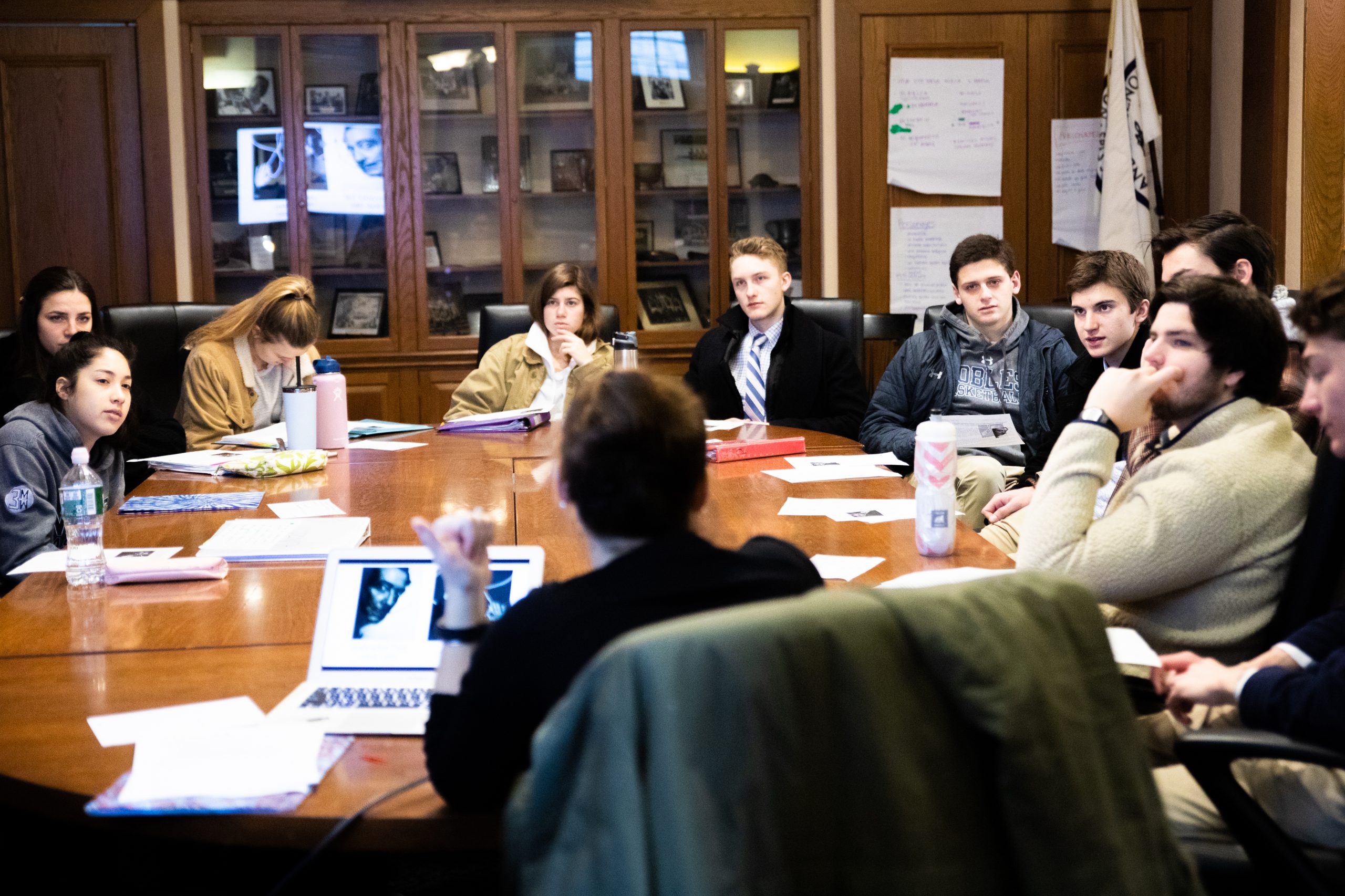 “A él no le gustaba el caos. Le gustaba el orden. ¿Que es un poco raro, bien? Porque esto es su estilo de pintar, y no le gusta el caos—le gusta el régimen pero su pintura no lo refleja.” (“He did not like the chaos. He liked order. Which is a little strange, right? Because this is his style of painting, and he doesn’t like the chaos—he likes the regimen but his painting does not reflect that.”) – Laura Yamartino, Modern Language Teacher, on Dalí’s style and beliefs.

Laura Yamartino’s Spanish 5 class wastes no time getting started in the Memorial Room on the first floor of Shattuck Schoolhouse, as there is much to cover. The students have just begun learning about the Surrealist painters Salvador Dalí and Joan Miró, and today’s class is an exploration of the political and historical context surrounding their work.

A discussion-based course, Spanish 5 began the quarter by analyzing propaganda posters from the era and viewing Guillermo del Toro’s “Laberinto del Fauno,” a magical realism film that is part historical fiction, part fairy tale, based shortly after the Spanish Civil War. Students then wrote stories that were allegories of the conflict, and according to Yamartino they looked at art “to show another medium by which people reacted to and or criticized the war, and specifically studied Dali´’s ‘Construcción Blanca con Judías Hervidas’ and Miró’s ‘Naturaleza Muerta con Zapato Viejo’ to practice analyzing art and to understand how artists on both sides of the conflict viewed the war.”

During the class, Yamartino projects images of paintings by Miró and Dalí, explaining the emergence of Surrealism as an art form during the Spanish Civil War. Conversing exclusively in Spanish, students offer their interpretations and read aloud with fluency. Yamartinio asks thought-provoking questions, urging the students to make connections between historical context, political beliefs and artistic styles: “Qué tienen en común? Los dos piensan que la guerra es mala, son del mismo lugar, y tienen los mismos estilos, pero tienen opiniones muy diferentes.” (“What do they have in common? They both think that the war is bad, they are from the same place, and they have the same styles, but they have very different opinions”).

After looking closely at Dalí and Miró, Yamartino introduces Picasso and the students work in pairs to discern his political beliefs, identifying the non-traditional images depicted in his art—images which clearly represent a lack of order. “¿Qué politica representa la falta de order?” (“Which politics represent the lack of order?) asks Yamartino, to which a student replies, “la izquierda” (“the left”). Students go on to compare the chaos in Picasso’s work to the relative structure represented in Dalí’s paintings.

Over the course of 45 minutes, students have practiced Spanish through an interdisciplinary lens, honing their conversational skills while integrating art and history into the discussion. In the upcoming weeks, they will collaborate to recreate Picasso’s “Guernica,” one of his most famous paintings and, says Yamartino, “a searing criticism of the war.” She explains that as the students finish the year, “they will look at ‘Movida Madrileña,’ a period after the dictatorship of the Spanish Civil War, where the pendulum swung away from traditional values and governing structures, and previously oppressed or voiceless groups gained power and visibility.”